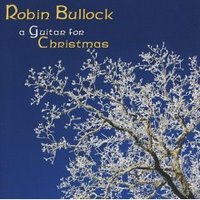 John Fahey may be gone but folk music still needs an acoustic guitarist to carry on his legacy. Fortunately we have Robin Bullock who does his best to keep Fahey alive. Bullock's A Guitar For Christmas is a sixteen track, all instrumental, solo, acoustic guitar CD. Only three of the sixteen tracks have any accompaniment. The bottom line is if you like Fahey chances are you'll like this CD too.

Bullock mixes traditional carols such as, "Hark, The Herald Angels Sing," "What Child Is This," "Carol Of The Bells," "O Little Town Of Bethlehem," and more with several obscure, mostly traditional Celtic works. Among them are the Scottish carol "Rorate," "Angelus ad Virginem" from the Oxford Book Of Carols, and "Wexford Carol" from County Wexford in Ireland.

The medley of "Jesus Won't You Come By Here/Go Tell It On The Mountain" is dedicated to Fahey, who according to Bullock's liner notes, is one of his musical heroes. He uses Fahey's arrangement of this medley as a fitting tribute.

Bullock is an award winning guitarist who has recorded eleven CDs since 1993. He is a native of Washington D.C. who currently lives in France. Read more about Bullock and his career on his website where you can find most of his other works.