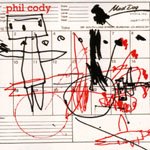 What a pleasure it is to listen to Mad Dog Sessions, folk-rocker Phil Cody’s third CD recorded in 1996, mixed and mastered in 2002, and released on Tiny Head Records to a world that should demand this music be played in heavy rotation on every adult alternative and college radio station in America.

While not blessed with the greatest set of pipes, Cody’s voice nevertheless fits in nicely with his songs and his singing should offend no one. The band functions mostly as an ensemble but there are a few notable solos throughout and everyone playing on the sessions turns in a professional job. Standout performances include Duncan Aldrich’s sax solo on “I Am A Thief” and lots of electric organ and piano by Rami Jaffe, keyboard player for The Wallflowers.

Cody wrote seventeen of the twenty songs on this album. The disc was culled down from a total of 34 songs he and the band recorded over a three-day period. Clocking in at 71:50, a CD of this length would qualify as a double album in the days of the long lost LP. At a time when too many artists fill an entire CD because they can, and include stuff they should leave on the cutting room floor, Mad Dog Sessions is a wonder. You may be thinking that this is too much Cody at one sitting but rest assured he can justify releasing every one of these tracks. No two arrangements sound the same, not an easy feat with a work of this length. His eclecticism is the hallmark of this album.

But the real stars of this album, and the primary focus of any folk-rock work, are Cody’s lyrics. With songs that are alternately humorous and sad, Cody succeeds at setting the proper mood for each song.

The disc opens with Woody Guthrie style social commentary on the historically accurate banjo and harmonica piece "Orphan Train," continues with the upbeat country song "Joe’s Neck of the Woods," and moves on to "Six Diamond Baguettes," about a broken love affair, that is the CD’s best rocker. On "1984" he reminisces about his childhood without getting maudlin or syrupy. There is even little electronic music on the introduction and fade of "I Was A Stepping Stone." A little psychedelic organ and similar lyrical sensibilities decorate "She Chases Rainbows."

Even Cody's taste in cover songs is impeccable. He sings Warren Zevon’s "Splendid Isolation," a splendidly serious song about the protagonist’s demand for solitude in a very busy world, that ironically is my favorite track on the disc. Then he shows us another side of himself closing the CD with a slowed down and mostly acoustic version of Elvis Presley’s "Viva Las Vegas."

I originally wrote a variation of this review in 2002. Unfortuntately since then Cody seems to have fallen off the face of the earth. His website is gone and has been reduced to a confusing MySpace page where you will find no mention of Mad Dog Sessions. Most traces of this CD seem to have vanished with Cody. It can not be found on Amazon and is not even mentioned in his biography in the All Music Guide. In fact the only place where it appears you can find any mention of this great CD is on Rami Jaffe's website. If you can find this disc you must give it a listen.