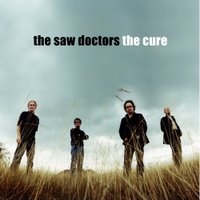 The Saw Doctors first three studio releases were all cut from the same cloth. They were irreverent and often light-hearted, pub rock albums with vocals sung through an echo chamber effect that frequently made the lyrics difficult to understand. Too often the Docs sounded like a bar band trying to adjust to a big arena. Fortunately the lyric sheets that came with each CD helped a lot. The only time the echo effect caused a problem with lyric comprehension was on their compilation of singles, EPs, and oddities, Play It Again Sham! (2003), and that was because the disc didn't contain a lyric sheet. Then on their fourth and fifth studio albums, Songs From Sun Street (1998) and Villains (2002), the Docs went to a folk-rock sound, featuring more acoustic instruments and upfront vocals that were easier to understand. The difference in sound was more a result of the production style rather than in the songwriting, arranging, or attitude.

With the release of The Cure the bar band sound that made The Saw Doctors reputation has returned but thankfully they've ditched the echo chamber vocals. Lead singer Davy Carton's voice is nicely up front and center.

The Cure is typical Saw Doctors in a lot of ways but it is not an album that will win over many new fans. Their inventive often clever lyrics are still there but the melodies all tend toward sameness. It’s not a bad release, and completists will want to own it, but newcomers should start with their debut If This Is Rock N’ Roll, I Want My Old Job Back (1991) and All The Way From Tuam (1993).