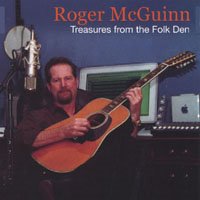 Roger McGuinn is in the Rock 'n' Roll Hall of Fame as a member of The Byrds, one of the most famous and influential American bands of all time, so it isn't necessary to plow into his long musical history here. His legacy is why people will explore Treasures From the Folk Den, a traditional folk song CD that perfectly explores his pre-Byrds folk roots. Treasures is an all-star CD that sprang from a feature McGuinn ran on his official website in which he recorded an old traditional folk song each month, and posted it on the site, along with a complete history of the song and how each one came into his life.

To make this CD McGuinn traveled around the country to sing and record with the world's most famous folk artists in their homes. He sings with Joan Baez and Eliza Carthy on "Wagoner's Lad," he duets with Judy Collins on "John Riley," and on "Alabama Bound" he harmonizes with Pete Seeger. "John The Revelator" features Jean Ritchie and Odetta. Tommy Makem, Frank and Mary Hamilton, and Josh White Jr. are also featured on this 18-track disc. McGuinn plays his wonderful 12-string on "Dink's Song" while singing with both Seeger and White.

The excellently detailed booklet that comes with the CD gives the listener exactly what the website offered, complete lyrics and a story about each song. Everything is well sung, well played, and is truly a labor of McGuinn's love.

There is not a trace of rock 'n' roll, electric instruments, drums, or modern music anywhere. While I have never been an aficionado of traditional folk music, and I never will be, I have no problem loading Treasures from the Folk Den in my CD player because of the outstanding performances.

Email ThisBlogThis!Share to TwitterShare to FacebookShare to Pinterest
Labels: Folk