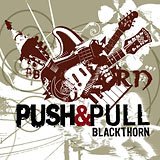 Visitors to this website who are not from the Philadelphia area, nor part of the thriving East Coast Celtic music scene, have probably never heard of Blackthorn, a perennial concert favorite in the region for the last fifteen years. Blackthorn have developed a loyal following from Philadelphia and its suburbs all the way to the Jersey shore playing bars, folk festivals, and numerous small town, outdoor, summer music venues.While they have been recording since 1994, and released five CDs, I was only introduced to their music in 2002. Since then I’ve made a point of seeing them live every summer except for last year. Because I missed them last summer July 19th was the first time I’ve seen the band live since their lineup underwent a major change. Paul Moore, who was a member of the original quartet, was their primary lead singer and their most prolific and best songwriter, left the band at the end of 2004.

The vacancy left by Moore could have been a disaster of major consequence but all indications are the band has weathered the storm quite well. The biggest reason is bassist Mike Boyce, the younger brother of keyboard player and founding member, John Boyce. Mike Boyce joined the band about five years ago and he has assumed all of Moore’s duties full time. On the band’s new CD, Push & Pull, the younger brother sings lead on six of the ten tracks and has written or co-written eight of the songs.

On their first two CDs Blackthorn recorded only cover versions of well-known Irish rock and traditional music. Both It’s An Irish Thing (1994) and Here We Go Again (1996) were full of music by artists as diverse as The Saw Doctors and Dexy’s Midnight Runners. There is even a version of Paul McCartney’s "Give Ireland Back To the Irish" on the latter. When the time arrived to record their third CD, 1998’s The Other Side, Moore assumed most of the writing duties when none other than Black 47’s Larry Kirwan (who wrote the liner notes for the album) suggested that no band is truly respected until they record an album of original songs. This CD turned out to be their best. The disc is loaded with songs about the Irish and Irish-American experiences. Many are sad and serious while others, especially the jigs and reels, have the party attitude that helps the Irish keep their chins up. Ratty Shoes followed in 2001. It is also a worthy release, but not quite as rewarding as its predecessor even with the inclusion of the title track, their best song. By this time the band had become a sextet when Mike Boyce joined in time to help them make the album. He immediately asserted himself, and became a prominent member, then when Moore left he became the dominant member.

While I prefer Moore’s songwriting to Boyce’s, Michael is quite talented and his writing fits in well with the band’s overall goals and sound. In other words, they still sound exactly like Blackthorn. He is a better vocalist than Moore and his more dynamic personality is better suited to his roll as front man. Unfortunately, during their recent concert at Eagleville Park Amphitheater in Eagleville, PA, Blackthorn returned to their early years by including more cover versions in their set and eliminating almost everything Moore wrote for them. That is a shame because for me his songs were always a highlight. However Push & Pull is fulfilling enough that Blackthorn needs to play more of this release live than they did that evening in Eagleville.

One of Push & Pull’s highlights for me is "September Skies," the first song written and recorded by longtime lead guitarist Seamus Kelleher. It’s a really sad song about September 11, 2001. It is also Kelleher’s first lead vocal with the band. He struggles to stay in tune but he pulls the task off on sheer will and the song is so good his vocal deficiencies are secondary to the music. Mike Boyce’s "Sacred Ground," a history about Irish immigrant railroad workers, and the opening track "Reflections," written by the two brothers and original member John McGroary, are both standouts.

Visit Blackthorn’s website to find everything you need to know about the band and how you can purchase all of their CDs.