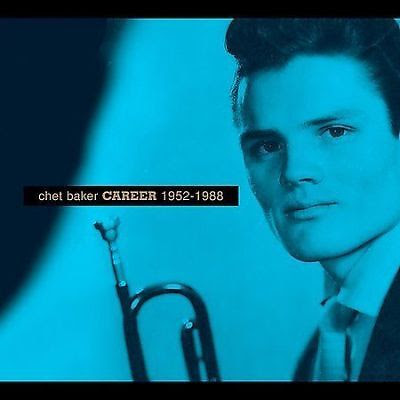 Career: 1952 - 1988 does an excellent job of showcasing all facets and time periods of Chet Baker’s career. This retrospective evenly divides the two talents Baker was known for: one disc is entirely instrumental and is called Trumpeter and the other is simply titled Singer. Each CD is in chronological order and includes both rarities and some gems.
There are both vocal and instrumental versions of Baker's signature tune, "My Funny Valentine." The first one - from 1952 - opens the first CD, and the second version closes the vocal set and was recorded less than a month before he died in 1988.

Trumpeter shows off Baker's versatility as a prominent member of the cool jazz movement of the 50s and 60s and beyond. While he was less known and respected for his singing the second disc also provides a true overview of Baker’s controversial but still appealing voice. The vocal disc is also a bit sad because, using his singing as a barometer, the listener can tell how far Baker's health deteriorated over the four decades of his career.
The outstanding compilation is only marred by a horrible live take of "There Will Never Be Another You" that sounds like it was taped by someone holding a cheap, portable cassette recorder from a hundred feet away. It should have been replaced with something much more listenable, especially since there is a wealth of material from Baker's catalog that could have been used instead. Why the producers allowed this track to be included is incomprehensible. Have your CD player's remote handy to skip it.

There is an exhaustive forty-six page booklet included with Career that offers almost everything a fan would need or want to know about the singer and trumpeter. Baker’s often sad life, mostly fueled by his addictions, is openly discussed. It is sad to know, as is true with many talented artists, that Baker could still be with us today if he hadn’t succumbed to those hideous excesses before he was sixty years old.

Career: 1952 -1988 will appeal to Baker’s fans and will also serve as an excellent detailed introduction to the life and music of this very talented jazzman.

Oddly, there doesn't appear to be any videos or sound clips available specifically representing this compilation so I'll close this post out with different versions of classic Baker tunes that appear on this set's track listing.