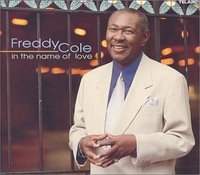 I never heard of Freddy Cole, the younger brother of Nat King Cole, until recently when I was assigned to write the review of this CD. Because of my ignorance I was astounded to learn that the younger Cole has had a 50-year recording career. I truly didn't know what to expect, but since I always loved Nat's singing, I looked forward to hearing Freddy's most recent release.

At times there are traces of Nat in Freddy's voice but he has his own distinctive sound. His voice is much rougher than Nat's and his vocals on this disc may be what Nat might have sounded like if he had lived and his voice changed with age. This isn't a criticism of his singing, and it really isn't fair to compare most vocalists to Nat King Cole without coming out on the short end of the stick, but I'm sure Freddy knows that comparisons are inevitable.

There are some excellent choices in material. Cole covers Boz Scaggs' "Harbor Lights," Van Morrison's "Have I Told You Lately That I Love You" and Bonnie Raitt's "I Can't Make You Love Me." These non-traditional jazz songs fit right into Cole's easygoing traditional jazz singing style. Cole's son Lionel wrote "Save a Little Time for Me," a nice selection that indicates this song was chosen for more than just nepotism. Other standout tracks are "Remember Me" and the closer, "I Loved You."

The instrumental arrangements combine modern smooth jazz sounds with more traditional jazz playing such as Will Lee's bass and some fine soprano sax by Jay Beckenstein of Spyro Gyra fame. Even better is David Mann on both soprano and alto saxes. The arrangements are all laid back and are appropriate backdrops for the the well-chosen songs.

How I wish I had known about Freddy Cole many years before I had the pleasure of listening to this CD.