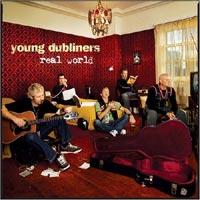 Keith Roberts and The Young Dubliners offer a slick, polished, and commercial Irish-rock sound that befits their home base of Los Angeles. Their style is a complete contrast to bands such as Black 47 who flaunt their grittier New York City street image. While Larry Kirwan's band, along with The Saw Doctors, U2, and the Pogues, wear their shamrocks on their sleeves the Dubliners roots are a little more subdued. Roberts makes it known the Dubliners have other things on their minds.

The fact that The Dubliners are more commercial than any of the bands mentioned above is given away by the arena rock sound of the title track as well as "Touch The Sky," and "Say It's So." There are no politics on this album, no songs about rebellion, and nary a word that would upset a conservative. "Please" is a love song that could be a hit on commercial FM radio and "Evermore," is a song about the singer's little girl, a subject that normally makes me cringe, yet Roberts somehow manages to avoid the sappiness that is routine in most songs of its ilk.

The standard rock keyboards, guitars, and drums are often accompanied by flutes, tin whistles, and fiddles which are the tipoff that this is an Irish-rock band because the lyrics seldom let you know this fact. The only exception is the high octane traditional Irish song "Waxies Dargle."

I like Real World and you may too if you want to hear Celtic-rock without much of its harder edged subject matter.