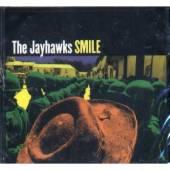 This country-rock/roots rock band has changed its sound since Mark Olson left the band a few years ago. I know I am in the minority of Jayhawks fans when I say this change is for the better. The band sports a cleaner, more produced sound than their previous albums offered, and the new lead singer, Olson’s co-founder Gary Louris, has a more pleasing voice than his predecessor.

The band now leans toward a slick British Invasion style sound, adding a few modern rock touches along the way. The rockers rock harder, the ballads are sweeter, and are reminiscent of the three-part harmonies used by the World’s foremost British Invasion band, The Beatles. Their old fans may consider this a more commercial venture, and that assertion is justified, but a more commercial sound wears well on this group. A few of the earlier influences remain but they take a back seat to Louris’s new sound.

The highlight is “I’m Gonna Make You Love Me” a song you will surely know if you are a faithful listener to college radio.

Other standout tracks include “Somewhere In Ohio,” (In My) Wildest Dreams,” and the title track. This is easily the best album by a standout band.
Country Jayhawks Rock 'n Roll