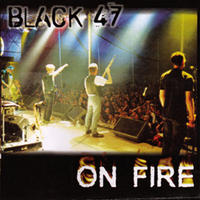 Black 47 make great records that suggest they rehearse more than lead singer and composer Larry Kirwan claims they do, but their stage shows continue to have a rowdy, sloppy, improvisational feel to them even when the band plays songs like “Funky Ceili” or “Maria’s Wedding,” both of which they have probably played on stage two thousand times or more.

Black 47 concertgoers are admittedly partisan and eagerly respond to the semi-drunken proceedings in their midst. The band even drinks on stage. They mostly play to small intimate crowds in bars and small clubs that enhance their stage show. The atmosphere at their shows conjures up images of what it must have been like at Liverpool’s Cavern Club to see another of rock’s bad boys, John Lennon, turn on the pre-Beatlemania crowd. So, it is fitting that Black 47 has released On Fire, their second live CD in just two years, (Live in New York City was released in 1999) because non-stop live gigging is how they earned their reputation as the house band for New York City.

The new live CD could be named Live In New York City, Volume 2 as this live material replicates the prior disc’s unrehearsed looseness of the performances, showcases the band’s vibrant, irreverent personality on stage, and gives listeners the same high quality recording by producer Stewart Lehrman who also did the honors for New York City.

Kirwan smartly makes sure none of the songs from the first live disc are repeated on the sixty-plus minutes of On Fire so if you play the discs back to back you will get a real sense of what a full two hour Black 47 stage show is like. On Fire contains music from their latest and best studio disc, Trouble In the Land, offering live renditions of “Those Saints” and “I Got Laid On James Joyce’s Grave.” A nice touch is the first appearance on a full length CD of “Our Lady of the Bronx” which until now only appeared on their long out of print 1992 EP. Excellent renditions of “Czechoslovakia,” “Bobby Sands MP,” and “Fire of Freedom” are highlights. The instrumental, “Johnny Byrne’s Jig,” isn’t quite as successful or exciting as its NYC counterpart, “The Reels,” and the cover of “Biko” which closes this disc isn’t as well played as their cover of Dylan’s “Like A Rolling Stone” which closes NYC, but all in all, this CD is another Black 47 joyride. They continue to party hardy through all of their social commentary and political statements and it is nice to know they do not take themselves too seriously while continuing to take their causes seriously.

It should be noted that this is the first CD appearance of Joe Mulvanerty, the uilleann piper who joined the band in early 2000 to replace the departed co-founder Chris Byrne who left amicably to front his own band. I agree with Kirwan who says that Mulvanerty brings a more musical pose to the band. Most of the rap and hip-hop elements that occasionally showed up in their music seem to have left with Byrne.

On Fire was recorded in Manhattan’s Wetlands on St. Patrick’s Day, 2001, three years to the day Live In New York City was recorded at the same venue.

If you have loved these eclectic Irish-American rockers in performance you will like On Fire. When on stage, Kirwan and his friends never disappoint.