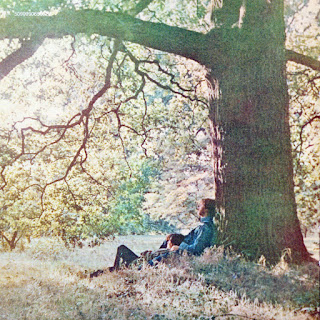 Plastic Ono Band is John Lennon's first legitimate solo album and one of only two Lennon solo sets that can be given a five star rating. The other is its follow up, the more famous and celebrated Imagine.

Despite being co-produced by Phil Spector, the album is the most stripped down set of music the ex-Beatle ever released and its songs cover everything from Lennon's views on religion, his Mother, his psychological well being, the working man, and more. It's full of thoughts he undoubtedly possessed while he was still with The Beatles but, until he was free from what he believed were the shackles that bound him to the World's most famous band, he didn't express them freely.

Supposedly, The Beatles (aka: The White Album) was the stripped down, anti-Sgt. Pepper's Lonely Hearts Club Band but that double set sounds over the top when compared to the starkness of this record. None of these tracks, with the possible exception of the straight ahead, romantic love song, "Love," could have appeared on a Fab Four album. The disc was inspired by the primal scream therapy sessions Lennon had with Dr. Arthur Janov.

"Working Class Hero" shockingly used a hefty four letter obscenity that was rarely used on recordings during this era to describe how common workers are eaten alive from childhood on. He also sings, "When they've tortured and scared you for twenty-odd years, Then they expect you to pick a career, When you can't really function you're so full of fear." It's just Lennon and his voice on a solo acoustic guitar.

On the simply titled "God," the composer offers his view of religion, "God is a concept by which we measure our pain." Then he lists fifteen things he doesn't believe in, including The Beatles, and ends the song's mid-section with "I just believe in me. Yoko and me, that's reality." He also tells us that "The dream is over."

Lennon's Mother, Julia, affected him greatly and there are two songs, "Mother," and "My Mummy's Dead" that proves he never got over losing her twice: once by her abandonment of him and then by her early death.

We all know that The Beatles founder was unhappy for a long time but we never knew how much he hid behind the facade of stardom until The Beatles ended. Here, he gave us a far better understanding of himself as a man.

As great as this album is, I'm glad Lennon found contentment and that he showed us some happiness and a little humor on his later records even if they don't reach the artistic heights of Plastic Ono Band.