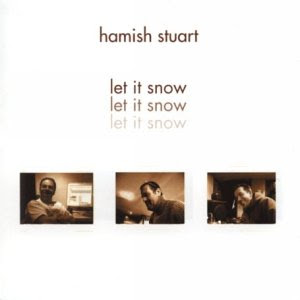 In 2002 Hamish Stuart released Let It Snow, his 27-minute, eight song, Christmas CD in the U.K. in lieu of sending Christmas cards to his friends and family. He was originally going to record only "The Christmas Song" and "White Christmas" but he and his band were having such a great time they kept the sessions going and included six more tunes.

Stuart, the former guitarist and bass player for the original Average White Band (1972-1983) and later a Paul McCartney sideman (1989 -1993), produced a tasteful, bare bones collection by keeping things simple. The breezy tracks are a hybrid of light R&B and jazz, the kind of stuff Stuart has always been good at. The arrangements include touches of flugelhorn, accordion, a little glockenspiel, and sleigh bells, of course.

Stuart does not offer us anything new. The eight tracks are overly familiar seasonal favorites that anyone who listens to pop Christmas music should instantly recognize. They could easily sound stale but the Glasgow, Scotland native and his mates put a fresh spin on all of them.

On Pledge Music Stuart wrote, "The concept was for the whole thing to sound very relaxed and low key, like there’s a little group playing in the corner of the room, hence the minimal production. With all that in mind I approached the vocals very gently. Nothing was sung louder than a normal conversation level."

Stuart doesn't have the world's greatest voice but it's good enough to get the job done on this quiet and unassuming disc that has never been properly released in The United States. It has long been out of print and it can be found at Amazon at ridiculous collector's prices.