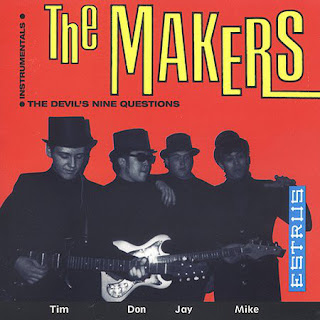 One of the great things about used record/CD shops is the ultra-cheap obscurities a shopper can stumble on. At Princeton Record Exchange, located downtown and a block away from the historic university's campus, you'll find what I believe to be one of the best stores of its kind in America.

While doing my usual perusing on a recent visit the employees were blasting music over the store's speaker system. It's what you do in a used record store. As expected, the young people who work there have highly eclectic and unusual tastes and what they play is frequently not to my liking. However, on this particular day they rang my bell. I asked the clerk what I was listening to and if it was for sale. He said it was a band named The Makers and, yes, the disc could be purchased for the too good to pass up price of $1.99 (plus New Jersey sales tax, of course).

The disc is not something you'll listen to for great musicianship or as serious art but if you want a good time the Spokane, WA crew is a fine choice.

Scott McCaughey, best known as an unofficial member of R. E. M. late in their career before he organized The Baseball Project, added piano on "Showdown."

Eight of the nine tracks on this mini-album came from inside the band and "J. A. J." is a cover of an old Kingsmen song. The whole set clocks in at under eighteen minutes.

The Makers' name is a spoof on The Ramones. Every band member takes the surname "Maker" and they are only identified on the CD by their first names: Tim (guitar), Don (bass), Jay (drums) and Mike (organ).

It is hard to find information on the The Makers. Their history appears to have stopped in 2005. I couldn't locate a website but they do have a Wikipedia page.