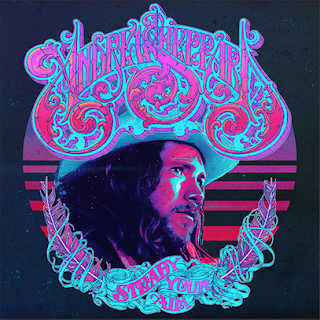 Have you ever wondered why a singer's voice matches the kind of music they perform? For instance, does Michael Bublé sing pop and jazz because that is what he excels at or is it because it's the music he loves? The first question crossed my mind immediately when I heard Steady Your Aim, the new, sophomore album from Andrew Sheppard. There are singers with better voices than the one this countrified roots-rocker possesses but there are few singers whose vocals fit the the kind of songs they sing as well as his does.

Upon graduation the young Sheppard moved to Los Angeles from Idaho to fulfill his skateboarding dreams but he tore up his knee. Fortunately, he also loved music so he renewed his interest in the art form after having played in several bands while in high school. Let's sincerely hope that Sheppard's knee has healed properly but the loss of his original career choice was our gain because he became an extremely talented singer-songwriter.

Sheppard started writing songs ten years ago at age nineteen and paid the usual dues most musicians do before he finally had a chance to record his first album, Far From Here, in 2015.

Eventually, Sheppard grew tired of the West Coast and he returned home to pursue a slower paced life. The first, and best track on the album, "Take A Walk With Me," is a result of that move and the title track discusses a musician's life on the road so there is a little bit of Jackson Browne's classic album, Running On Empty, woven throughout Sheppard's set.

Sheppard's music is accurately described in his press materials as having an "outlaw mentality" but that doesn't mean his lyrics aren't thoughtful. As with all singer-songwriters he looks inward and is self-reflective but he is also able to take a hard look at the world around him. While not specifically directed at The White House, on "Not My Kind" he sings, "I never joined your cavalry, but I'm signed up to ride so I see. What do you expect me to do, when I don't respect men like you? You want me to fall, grovel and bleed, when you walk the same floor as me."

If you're ears are sensitive, be warned, Sheppard's language can be a bit rough at times but he has good enough taste to avoid using the English language's crudest four letter words and in some cases the street language actually enhances the stories he has to tell.

Steady Your Aim is an early candidate for Bloggerhythms' "best of" list for this year.

Listen to "Take A Walk With Me" here and enjoy an acoustic version of "Steady Your Aim" below.