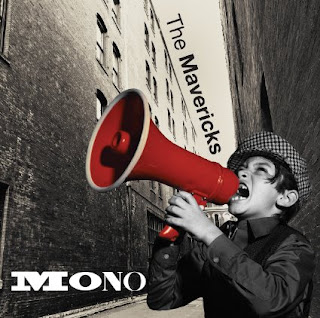 The Mavericks haven't always sounded like a stereotypical country band and that's because they've only marginally ever been one. They've absorbed too many influences to be truly Nashville despite the fact the city is the band's home base. What they do sound like are themselves and that should be apparent from the first note of the salsa drenched "All Night Long," a killer dance track that is the best way to open their new album, Mono. If you don't recognize the quartet from that first millisecond you're just not a fan.

Raul Malo and his friends continue to mix a recipe of country, early rock 'n roll, their leader's excellent songwriting, and his even better "Roy Orbison" vocal chords into a stew that makes them one of America's great party bands. Despite all of their successes I can still see them kicking butt as a bar's house band every Saturday night and being happy about it.

Guitarist Eddie Perez who joined in 2003, original drummer Paul Deakin, and sideman Jerry Dale McFadden, who has played keyboards for the veteran band since 1994 on all of their recordings and concerts (now promoted to permanent membership), couldn't form a better partnership supporting Malo's songs with vigor, true love of what they do, and their always superlative chops.

As usual, there are some nice Latin touches to The Mavericks' music. "Nitty Gritty" is pure Tex-Mex while "Summertime (When I'm With You)" possesses an easily accessible ska backbeat. The ballads, "Let It Rain (On Me)," "Fascinate Me," and "Pardon Me" show what Malo can do with his marvelous voice. "Stories We Could Tell" is a 50s rocker that will even have people who can't dance stomping their feet. They won't be able to help themselves.

In keeping with The Mavericks' love affair with music of earlier generations these twelve songs were recorded in mono, hence the album's title.

Sadly, this is the first CD The Mavericks have made without bassist Robert Reynolds, the man who started the band all those years ago with Malo and Deakin. He was fired in 2014 due to an ongoing drug problem that forced him into rehab several times, attempts that were financed by the band. He was also accused of trying to acquire money from fans. Nevertheless, The Mavericks have risen above that tribulation to give the world another set of tunes that add to their legacy while making the world feel good again.