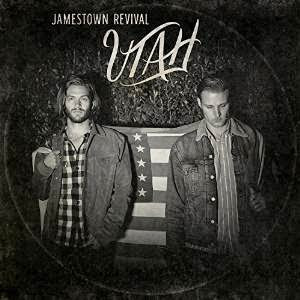 There is a reason Apple created iTunes Radio. Recently, I was listening to one of their stations as I was surfing the web. When "California (Cast Iron Soul)" by newcomers Jamestown Revival blared out of my speakers I became instantly addicted and was compelled to flip over to the store to search for more. What I found was a gem of an album.

The modern folk music revival currently producing an abundance of great work is epitomized by groups such as The Lumineers, The Lone Bellow, The Head and The Heart, and The Avett Brothers but all of these artists are clearly different from the pure folkies (Bob Dylan, Joan Baez, Peter, Paul & Mary, Kingston Trio, etc.) who regularly raided the charts fifty years ago or more. The difference now, fifteen years into the 21st century, is that instead of rock 'n rollers being influenced by folk as they were back in the 60s, the new folk bands are influenced heavily by both rock and pop. Jamestown Revival's harmony filled, earthy, debut album, Utah, is a typically excellent example.

Jonathan Clay and Zack Chance, two Texas natives currently based in Los Angeles, have forged their own identity on eleven songs that incorporate the styles of all of the bands mentioned above but, fortunately, they are not mere copycats. While their influences are obvious Clay and Chance are revealed to be astonishingly good autobiographical composers and you'll realize quickly that you're listening to something very special.

The two friends have known each other since childhood but only got together in 2011 to make "back-porch folk-rock" and they finally recorded their debut in the very rural Wasatch Mountains of Utah, hence the name of the CD.

The radio-ready "California (Cast Iron Soul)" is easy to sing along to and surpassed only by the bouncy, down home, gospel flavored, "Revival." "Fur Coat Blues" could have come from The Everly Brothers. "Heavy Heart" and "Golden Age" are ballads with tight harmonies. "Wandering Man" is something that the Avett's may have written, and the lead vocal on "Time Is Gone" sounds like the The Lone Bellow's Zack Williams. "Home" is one of the album's rare moments where modern technology makes an appearance but it's not used to the extent that the production feels out of place with the rest of the record. Two other standouts are "Truth" and the rollicking "Headhunters."

Jamestown Revival's professionalism is beyond reproach and Clay and Chance are both fine vocalists. It's difficult to believe that Utah was made by a couple of studio rookies. It's the best debut album I've heard in a long time.

The sessions were captured entirely on good, old fashioned tape and and performed entirely live.

Learn more on their website and watch this brief interview with the boys.