February 02, 2014
The following book review of Liverpool Fantasy, a novel based on the very early career of The Beatles, and an email interview with its author, Larry Kirwan, were originally published on Bloggerhythms on May 5, 2005 in the first two weeks of this blog's existence. As a result only twenty-six people read the article in nine years. So, in tribute to the upcoming 50th anniversary of The Beatles' American debut on The Ed Sullivan Show it's time to re-post both parts of the original piece because a lot more eyeballs are perusing this little website today then when it first appeared online all those years ago. However, this time the interview will be split off into a separate entry on the actual anniversary (next Sunday), so stay tuned and don't touch that dial. 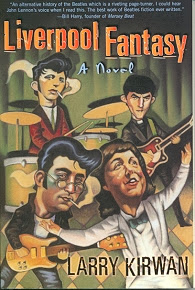 In addition to leading Black 47, New York City's infamous Irish-rock band for the last fifteen years, author Larry Kirwan is also a playwright, and now he has published his first novel, Liverpool Fantasy. It's a tale about the most famous rock band that ever lived written by one of the most fascinating and intelligent songwriters in rock.

No, Larry Kirwan's just released first novel, Liverpool Fantasy, isn't James Joyce, and it isn't intended to be, but as Kirwan wished for in a Black 47 song it appears that the bandleader has finally gotten laid on Joyce's grave, and that the late Irish author's genius really did rub off on him. But Kirwan doesn't need Joyce's intelligence because his talents as a writer of fiction are apparent in their own right.

Liverpool Fantasy is an adaptation of Kirwan's stage play of the same name. The book answers an intriguing question: How would The Beatles lives turned out if they never made it, never turned popular music, a decade, and the world upside down? It is something I frankly never thought about until I first heard about Kirwan's play three years ago. But those thoughts have obviously crossed his fertile mind and I am glad they did.

The book begins at Abbey Road studios in 1962 when John Lennon walks out of a Beatles recording session over a dispute with the record company while recording a followup to their first single, "Love Me Do." George Harrison and Ringo Starr walk out with him, thereby ending The Beatles forever.

Flash ahead twenty-five years. World famous Las Vegas singer Paul Montana, formerly known as Paul McCartney, whose long TV and singing career has hit the skids, pines for the old days with his former mates and he returns to Liverpool for a reunion. Montana finds that John has lived for many years on the dole, George has become a Catholic Priest and Ringo's real first wife, Maureen Cox, supports him. Many real life characters from The Beatles Liverpool days (Gerry Marsden of Gerry and The Pacemakers, Pete Best, and Julian Lennon are among them) have supporting and cameo roles and we are introduced to numerous fictitious friends, lovers, acquaintances and business associates the former band members met throughout the last quarter century.

The story seems so real at times that I forgot the book was not a true account of the lives of these four men, but a fictionalized what-might-have-been. Even though Kirwan's non-fab four have very different lives from the ones they really lived, The Beatles personalities make their alternate existences seem vividly possible, perhaps even probable. Kirwan's knowledge of his subjects, his familiarity with English culture and society, and his usage of Liverpudlian dialect make the book seem very real.

Of course I'm glad things didn't turn out Kirwan's way for either the mop tops or us. I would hate to live in a musical world where we had to listen to Montana croon in casinos in lieu of McCartney screaming "Long Tall Sally," or without Harrison playing magnificent weeping slide guitar, or Lennon revealing his deepest thoughts in songs like "In My Life." But after reading Liverpool Fantasy you can easily imagine there are no Beatles. It's easy if you try.
Beatles Black 47 British Invasion Celtic Rock Larry Kirwan Music Books and Magazines