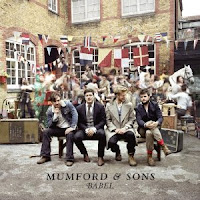 England's Mumford & Sons have quickly become an international sensation by mining the same musical territory as North Carolina's excellent Avett Brothers. While the band's lineup suggests they are true folkies their high energy music is frequently not for the faint of heart. Together the quartet plays a unique synthesis of rock and folk.

The four mates don't play their instruments in quiet coffee houses where you can hear a feather drop on the floor during a set. Instead, the Mumford men play music with a kick that is readily apparent on Babel, their successful followup to 2009's rookie release, Sigh No More. They're also serious lyricists with a profound confessional tone so fans of singer-songwriters will also find something appealing in their music too.

Babel doesn't suffer from the sophomore jinx. Good songs are everywhere, especially on the album's deluxe edition that adds three extra tracks to the original twelve. Among them is an excellent cover of Simon & Garfunkel's "The Boxer" featuring a guest appearance by dobro player extraordinaire Jerry Douglas. It's an interesting choice that indicates there aren't many light lyrical moments on a Mumford album. "Broken Crown," "Whispers In the Dark," the boisterous title tune, and Babel's big hit, "I Will Wait," are as rowdy as acoustic music can get.

Producer Markus Dravs, who led the way on Arcade Fire's Grammy winning album, The Suburbs, as well as a couple of discs for Coldplay, has manned the sessions for both of the folk-rockers' full length records.

With Babel, Mumford & Sons prove they are a band for people who have always loved rock music but just can't seem to wrap their arms around much of the stuff on the current rock scene.
Folk Mumford and Sons Rock 'n Roll Singer-Songwriters