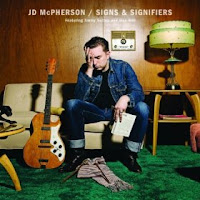 Newcomer J. D. McPherson, who is only in his mid-30s, said that he doesn't like any music after 1958 and he backs that statement up with his very first album, Signs & Signifiers. The guitarist embraces old time rock 'n roll pumped up by equal amounts of rockabilly and R & B and he's also a songwriter who can take credit for partially composing ten of the twelve songs on the album.

While Brian Setzer and some others who have fashioned nice careers mining the early days of rock often come across as if they're parodying the sub-genre McPherson's work is as authentic as anything its founding fathers created all those years ago. His music is edgier than that of his idol, Buddy Holly, and his singing is just as invigorating as any of the classic shouters of the '50s.

Signs & Signifiers was originally issued in 2010 and re-released this year to a much larger audience on Rounder Records. It's available as a download, on CD, or appropriately enough, on LP. McPherson's new marriage and honeymoon with an established label is working well for him because he is beginning to acquire some national recognition.  The album's single and opening track, "North Side Gal," is receiving some nice radio airplay.

McPherson is helped along the way by acoustic bassist and producer Jimmy Sutton who is an acclaimed Chicago musician with an established reputation for getting the most out of artists who admire the music of this period. His engineer, Alex Hall, another lover of 50s rock, supplied all of the keyboard and drum work. To keep it real they recorded every track on 1/4 inch analog tape at Sutton's home studio.

The Oklahoman is also a crowd pleaser who looks the part without sporting a greasy pompadour. With Sutton onboard playing upright bass his recent live performance at Camden, New Jersey's XPoNential Music Festival, sponsored by local radio station WXPN, was totally entertaining. You can listen to his entire Camden performance here.

McPherson, a former art teacher, earned a masters degree from Tulsa University in something called open media after his undergrad work in experimental film was completed at the University of Oklahoma. Despite the two degrees in visual media his first love has always been music. Learn more about him on his official website.

You can buy the album at Amazon.
Rock 'n Roll Singer-Songwriters