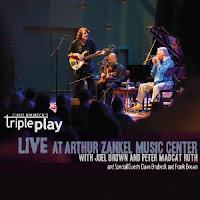 It's hard to categorize Chris Brubeck's Triple Play. They're mostly billed as a jazz band but they play almost as much acoustic, delta blues as they do jazz. Their eclectic repertoire includes some very old jazz standards, a little Robert Johnson and Fats Waller, and a few originals. For the uninitiated, the trio is Peter "Madcat" Ruth on harmonica, jaw harp, guitar, ukulele, percussion, and vocals, Joel Brown on acoustic guitar and vocals, and leader Brubeck on bass, trombone, and vocals. Brown is the son of 85 year old clarinetist Frank Brown, and Brubeck is the son of jazz legend Dave Brubeck who, at the age of 90, can still play his butt off.

For years Chris Brubeck was a member of his Dad's group but eventually he started his own band. His resume also includes a concerto for trombone that he wrote for the London Symphony Orchestra and he has also played with Celtic music star Eileen Ivers.

There is a lot to like on Triple Play's new CD, Live At Arthur Zankel Music Center. This concert was recorded last June at Skidmore College's music hall as part of the 2011 Saratoga Artsfest where they were joined onstage by the elder Brown and Chris Brubeck's famous father.

Almost half of the twelve song set is acoustic blues featuring songs like "Brother, Can You Spare a Dime?" and Robert Johnson's "Phonograph Blues." The latter allows Frank Brown to show off his prodigious clarinet skills. The session opens with the harmonica fueled "Rolling and Tumblin," an old chestnut covered endlessly by bluesmen all over the world. There's even some feisty humor on Chris Brubeck's "Mighty Mrs. Hippy" (love the word play). It's a new song about a hippy riverboat captain's adventures with the women he knows all along the waterway. Also fun is Ruth's "Win the Lotto," a tune about luck and hitting it big.

At about the show's midway point the group breaks into The Dave Brubeck Quartet's "Blue Rondo a la Turk" with its composer unexpectedly strolling out onto the stage in the middle of the tune to some very nice applause. Brubeck then sat down at his piano to jam with the band where he remained for the rest of the twelve song, seventy-seven minute set. Madcat's harmonica solo on "Take Five" brings a whole new dimension to the jazz classic that also features the master on piano. He stars again on Fats Waller's "Black and Blue" and on his Frédéric Chopin influenced "Dziekuje" he performed unaccompanied by the rest of the band. All five ended the evening with a ten minute version of another ancient jazz work, W. C. Handy's "St. Louis Blues."

If you like blues and the instrumental jazz of Dave Brubeck this disc should be very much to your liking. However, purists of either genre may find the music's split personality makes the band sound directionless.