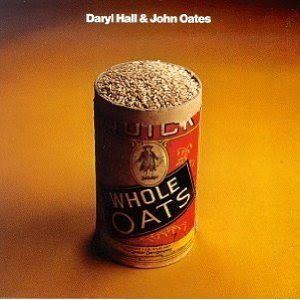 Whole Oats, the out of print, debut album from Hall & Oates is a complete anomaly in their catalog. The LP is more acoustic folk music than blue-eyed soul and more singer-songwriter based soft pop than rock. Here they sound nothing like the monster hitmaking machine of ten years later. Even so, it's obvious the duo was targeted for big things because Atlantic Records signed them to a contract and assigned the outstanding Arif Mardin to produce. His sterling track record includes Dusty Springfield's Dusty In Memphis.

According to Wikipedia, the famous Philadelphians were going to use Whole Oats as their band name, and Atlantic even released a 45 RPM with that moniker, but the album was released in their own names instead even though they kept the original play on words as the album title.

The closest this platter sounds to anything else Hall and Oates ever recorded was their classic followup, Abandoned Luncheonette, from 1973 but even that record differed greatly from this one because Whole Oats is easily the quietest music the duo ever put on vinyl. The upbeat moments remind the listener of Luncheonette, especially on the regional favorite "Fall in Philadelphia." "Goodnight and Goodmorning" features Hall on mandolin, a track that sounds like "When the Morning Comes," part one. "Lilly (Are You Happy)," "I'm Sorry," and "All Our Love" also have light traces of R & B, tight harmonies, or both, but the rest of the time these two voices will be hard to recognize. Very soft acoustic backdrops frequently accompany solo vocals, most notably on Hall's "Waterfall," which is predominantly his voice backed by a quiet acoustic piano.

Whole Oats is for H & O completists, aficionados (like me) of the 70s version of the blue-eyed soulsters, and for fans of ballads and light rock. If you are someone stuck in the Private Eyes and H2O era of the band you might be taken by surprise and possibly even disappointed at what you'll hear.