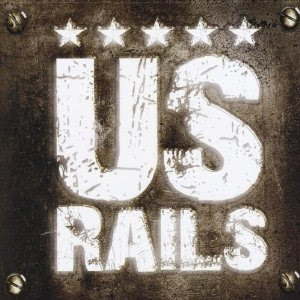 US Rails may have sowed their seeds in Philadelphia but they are currently living all over the globe. Their second CD, Southern Canon, was just completed in Germany where acoustic guitarist Joseph Parsons currently resides. Bassist Scott Bricklin lives in Paris. Ben Arnold (keyboards) still makes The City of Brotherly Love his home as does drummer Matt Muir. Tom Gillam (lead and slide guitar), the only member not from the town where America was born, hails from another, even better musical locale, Austin, TX.

These no nonsense roots rockers have an interesting back story. About ten years ago local college radio station WXPN, 88.5 FM, licensed to the Ivy League's University of Pennsylvania, asked a couple of local singer-songwriters who had already released their own CDs to put a band together for a music festival they were hosting. Parsons, Arnold, and Bricklin teamed up with a fourth member, Jim Boggia, to form the harmony laden, adult-oriented rock band, 4 Way Street, named after an old, Crosby, Stills, Nash, and Young LP. The new band, thanks to WXPN’s help, acquired a small but loyal following. I saw them live at The Point, in Bryn Mawr, PA, a tiny venue where I attended numerous concerts. 4 Way Street’s gig was the best one I ever saw at the now defunct and greatly missed coffeehouse.

Just as satisfying was the group's one and only CD, Pretzel Park. While the quartet didn’t sound too much like CSN&Y, the CD had very cool, well thought out harmonies that captured the spirit of the famous classic rockers. "Change Gonna Come," "Shoot the Moon," and "Barbed Wire" were the perfect synthesis of four voices blending together for the common good. Other favorites include Parson’s "Ceremony" and Boggia's "Several Thousand." The latter was covered by California Transit Authority, the new band led by former Chicago drummer Danny Seraphine on their debut CD, Full Circle. (I may be the only person in the world to have two different versions of Boggia's song on his ipod.)

Unfortunately, because 4 Way Street was never able to spread their wings beyond the Philadelphia area the quartet eventually went their separate ways. Then last year Parsons, Arnold, and Bricklin, without Boggia, joined forces with Muir (who was an unofficial fifth member of 4 Way Street both live and in the studio) and Gillam in the fledgling US Rails.

While the new outfit's predecessor used a folk-rock template as the foundation for their music the addition of Gillam established US Rails as a real rock band. Vocally, the four and five part harmonies are still there, though less prominent than before, and all five take turns singing lead. Their diverse vocal styles range from Arnold's soft, but not unappealing rasp to Parsons' deep, rich, baritone.

Gillam is a versatile axeman, and while he does get a chance to show off his chops with US Rails his role with them requires that he often exhibit some restraint. However, if he was ever featured in a situation where he could truly cut loose in a jam band or power trio format he could easily scorch your ears (in a good way).

The band's eponymous debut opens with "Lucky Stars." It's a song that sounds as if it belonged to 4 Way Street because all five voices blend beautifully while they tell us how happy they are to be "banging on our drum and strumming our guitars." The song possesses everything that was best about their old band. Parson's acoustic "Gonna Shine" brings their melodic talents to the forefront. It's a sunny pop song that sticks easily in your head. Arnold's "Rainwater" also fits the mold but Bricklin's "Rockin' Chair" is the polar opposite. It's raw and raunchy and is blues-rock at its finest. Gillam's "Shine Your Light" is a rousing rock anthem. Each track is an example of how versatile a band can be when everyone is a talented writer.

Even better is Southern Canon released just a little over one month ago. Bricklin opens the proceedings with the boogie tune, "Heart Don't Lie." He also rocks out with "18 & Lonely." Gillam and Muir collaborate on the rocking "Live Like We Love," while Arnold is sincere when advising us all to "Do What You Love." Parsons takes the pop route again with the uptempo love song, "Heartbeat Away." Two ballads close out the thirteen song set. Arnold wears his emotions on his sleeve with "You're My Home" while Gillam shows he is not just a rocker but also a soulful balladeer on "Old Song On the Radio."

Read more about US Rails at ReverbNation.