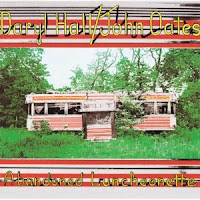 Hall & Oates have always been an enigma. To this day they remain an immensely talented duo capable of some of the greatest white R&B vocal harmonies ever put down on vinyl. Yet during their heyday of the 80s, when they surpassed the Everly Brothers as the biggest selling duo in history, they succumbed, just like everyone else, to the excesses of the synthesizer. To me, during their hitmaking years they often sounded more like a new wave act than one playing blue-eyed soul while tallying up a ton of hits that included rock standards such as "Kiss on My List, "You Make My Dreams," "I Can't Go for That (No Can Do), "Maneater," "You've Lost That Lovin' Feeling," and many more.

Don't misunderstand me. They're good songs. It's just that the 80s production values washed most of the urban grit out of their arrangements. More recently, when H & O have performed the same songs properly with a drummer that isn't a robot, they have become masterworks of the genre the two Philadelphians love so much.

Hall and Oates began their career with so much promise. After a listenable, folky debut LP, Whole Oats, they achieved greatness with one of the best albums of the classic rock era, Abandoned Luncheonette, released in 1973. The best way to describe this record is to use the term "acoustic soul" because so much of it sounds like folk music with Philly soul harmonies.

The album opens with one of their greatest tracks, Hall's "When the Morning Comes" and moves gracefully to Oates' "Had I Known You Better Then," in which his rich baritone nicely complements Hall's higher register. The same can be said of "Las Vegas Turnaround (The Stewardess Song)." Their classic collaboration, "She's Gone," follows and although it wasn't an overnight success it eventually became a huge early hit and one of the finer accomplishments of their career. Side one, in which Oates is both an equal and outstanding contributor, closes with his excellent "I'm Just a Kid (Don't Make Me Feel Like a Man). If you stop listening here you'll wonder why Hall became the star while Oates' contributions were pushed into the background.

The four songs on side two are dominated by Hall and, while he was still working with Oates as a true team, they are less memorable when compared to the genius of side one. If the flip side stands all by itself, the title track, "Lady Rain," "Laughing Boy," and the album's closer, "Everytime I Look at You" (complete with a banjo, an instrument the duo is not known for using) are also quite enjoyable.

After almost a decade long sabbatical in the 90s Hall and Oates returned in the new century, ditched most of the computerized gadgetry, and released some of the best work they ever recorded including Home for Christmas, one of the greatest rock Christmas CDs of all time.