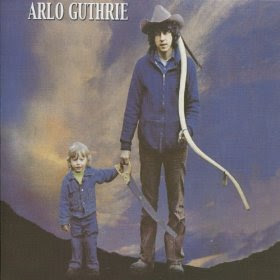 I've been searching in vain for some appropriate music that would allow me to combine today's Thanksgiving holiday with Forgotten Music Thursday. Unfortunately, the only Thanksgiving song I could come up with was Arlo Guthrie's "Alice's Restaurant Massacree," and that epic is hardly forgotten. However, with Guthrie on my mind while perusing my old LP collection, I came across a song from his 1974 eponymous album called "Presidential Rag," a very dated but totally cool political screed ripping the late President Richard Nixon for his roll in the Watergate scandal.

There really isn't a whole lot to write about concerning "Presidential Rag." The best way to appreciate the song is to just listen to it. History buffs and those of us old enough to remember the whole sordid affair will understand and maybe sympathize with Guthrie's anger while leaving everyone else out in the cold. Trust me, I'm not trying to start a political argument on what is exclusively a music blog but I thought this song was good enough to be raised from the dead one more time.