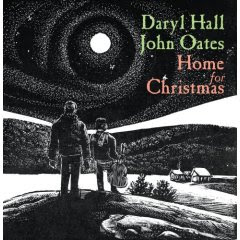 I've always liked Hall and Oates from afar but in recent years I've come to appreciate them a lot more than I have in the past. Home For Christmas is their third really strong CD in a row following 2003's Do It For Love and 2004's Our Kind Of Soul. All three CDs rival their best albums from the 70s and 80s suggesting that the 21st century edition of H & O is arguably just as good as their earlier incarnations. Even considering their current hot streak I still wasn't expecting anything as stunningly and consistently great as Home For Christmas, the best new holiday disc I've heard in several years.

While Home For Christmas never loses sight of what H & O do best (making blue-eyed soul colored with lots of mainstream pop-rock) their choice of material for this album indicates the duo has far more eclectic tastes than they ever showed us during their glory years of the early 80s. Recording carols and religious songs for pop Christmas CDs are considered brave moves during these overly politically correct times but apparently Hall and Oates are unafraid of any negativity. "The First Noel" and "O Holy Night" both sound fine in the Hall and Oates production style and "It Came Upon a Midnight Clear" reminds the listener of the acoustic soul from their adventurous early 70s records.

There are two original songs. Oates' "No Child Should Ever Cry On Christmas" proves he should sing lead far more often. Hall's title track is excellent too but where this album really shines is on the well chosen and obscure cover material. Stax-Volt's William Bell and Booker T. Jones wrote "Everyday Will Be Like A Holiday" and it's rendered superbly here. Robbie Robertson's sacred "Christmas Must Be Tonight" is another excellent choice.

Two traditional gospel songs are the biggest surprises. A fine arrangement of "Mary Had A Baby" is preceded by the CD's real treat: an exciting uptempo version of "Children Go Where I Send Thee" in which the whole band raves it up in full gospel mode.

The only excursion into the land of overused and abused Christmas songs are "The Christmas Song" and a new version of their only previous holiday release, "Jingle Bell Rock." Charlie DeChant's sax and Oates's lead vocal on the former are nice touches and Hall's take on the latter does not disappoint.