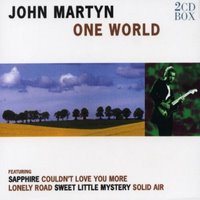 John Martyn's One World, released in 2005, is a double disc, British import compilation that should not be confused with his 1977 album of the same name.
Martyn was a contemporary of the same folk scene that helped launch the careers of Ralph "Streets Of London" McTell and Al "Year Of The Cat" Stewart but he soon forged a different direction for himself.
The late rocker is well regarded among those who knew him, but the general population and mainstream music fans haven't a clue who he is. Some music fans may only know him for composing "May You Never" a cool little tune that Eric Clapton covered a long time ago on his Slowhand album.

Most of the music here is very appealing blue-eyed soul, light funk, or smooth jazz. Instrumentally it is all top drawer with great arrangements. Listening to Martyn on the surface can be a very pleasurable experience because you have to dig deeper to find the music's flaws. Unfortunately, upon closer listening you may find him to be a terrible vocalist with a voice that often strains, and fails, to achieve musicality. Yet I still found enough good music on these two CDs to set his vocal limitations aside because he is frequently able to camouflage those shortcomings.

Another problem with this compilation is the liner notes. There is a brief biography and that is all. Compilations should have more detail than what is offered on this independent release. There are no listings of session dates, musicians, or the albums each song originally appeared on. There aren't even composing credits. The set offers nothing more than a track listing.

I give One World a thumbs up, but be forewarned. John Martyn is not for everybody.