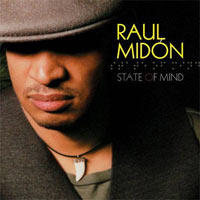 After seeing Raul Midon perform a brief live set I was impressed enough with him to plunk down $10 for his debut studio CD, State Of Mind. Unfortunately, after a few listens this has turned out to be a mixed blessing.

Vocally Midon can be described as a cross between Stevie Wonder and George Benson, and that is good news. He also plays very nice acoustic guitar in a very rhythmic and aggressive style that, when you close your eyes, gives you the impression you are listening to a full band.  Midon can also do an uncanny vocal impression of trumpet playing that he calls "mouth trumpet" in the liner notes of his CD. It is a very cool gimmick that enhances his sound.

You can tell that EMI’s Manhattan Records took Midon seriously as a talent. The CD was produced by veterans Arif and Joe Mardin. Stevie Wonder played harmonica on "Sittin’ In The Middle" and there is a duet with Jason Mraz on the jointly penned "Keep On Hoping."

The problems arise when you listen to the lyrics. Obsessively singing the lines "I wanna be rich" on the title track just smells of greed and is a complete turn off. On "Waited All My Life" Midon sings the awful line "I have waited all my life for you but I didn’t know it" and "Baby we were meant to be." Haven’t I heard lines like the latter one hundreds of times before? On "Everybody" he sings "Everybody Can Be Somebody, Everybody is free to make a difference" and "You don’t have to be a big celebrity to feel the power." It sounds like an old hippie anthem from Woodstock.

Musically there is a lot to like, and therefore you have reasons to pay attention to Raul Midon in the future, but he has to learn to write better songs. I can only marginally recommend this disc.

Midon released World Within A World in 2007 and recently switched labels for this year's release of Synthesis.

Email ThisBlogThis!Share to TwitterShare to FacebookShare to Pinterest
Labels: Rhythm and Blues, Singer-Songwriters