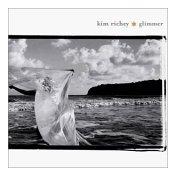 Richey's third album, Glimmer, is both a departure from her first two albums and a major disappointment. Her earlier work hinted she considered herself a member of the contemporary country sound. Instrumentally, her music featured clean sounding rock and roll arrangements and great musicianship that exhibited little of the country twang disliked by more urbane rock and pop music lovers. For those unfamiliar with Richey's music, her first two CDs remind one of a more conservative Mary Chapin Carpenter with a sweeter sound and less edgy lyrics.

What went wrong on this disc? Most of the rock and roll is gone. Only on "The Way It Never Was" and "Strength In You" does Richey approach the style and quality of her earlier work. Both would fit in nicely on either of her first two discs. Most of the rest is bogged down with synthesizers, strings, and glossy production. Despite the fact that all of her albums are thematically centered around songs about lost love, the earthier music of Bitter Sweet made Richey sound like she was down but not out and full of hope. Glimmer makes Richey sound like one of folk music's sensitive, self-pitying, depressed troubadours. Let's hope this change in direction is an aberration and not a step toward refashioning herself as a slick singer-songwriter.