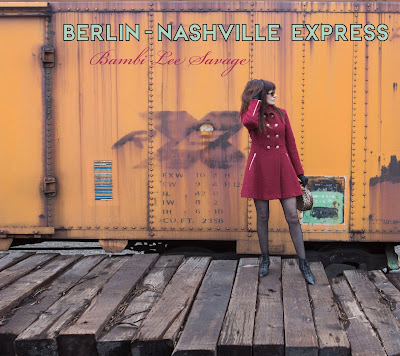 Bambi Lee Savages (BLS) has acquired a very good resume. In the 90s she worked as an audio engineer. Her work included U2's Achtung Baby and The Bad Seeds' The Good Son. Also, an earlier version of "Darlin'," the last song on her new album, Berlin-Nashville Express, named after the two cities where its ten songs were composed, was included on the soundtrack to the movie Sling Blade and was produced by Daniel Lanois.

In the process BLS discovered that songwriting suited her more than working in a control room so she cultivated her composing talent instead. Fortunately, it took root and blossomed.

Lanois, Bono, and the Bad Seeds' Mick Harvey have all helped Savage jump start her career and both Harvey and Lanois play on Berlin-Nashville Express.

BLS has released three previous solo albums. All of them fall into the alt-rock sub-genre while Express is pure unadulterated country. On this record she sites Loretta Lynn, Hank Williams and gospel music as inspirations. She said that it was surprising when country influences began turning up in her writing but the result, she says, is a gratifying set of new songs.

Perhaps Savage's inadvertent change in musical direction was fueled by her recent conversion to Christianity, something she discusses in several songs, even the ones that reference her penchant for drinking. On "Demon Alcohol" she admits her love for the hard stuff but at the same time she uses a synonym for the devil as an adjective to describe it. On "Drinker of Gin" she directly addresses her new found religiosity without getting preachy. Oddly, there are lots of references to both Jesus and booze all over the disc.

These songs have bite, most of them are uptempo, and they even rock. There is nothing on the record that suggests folk or bluegrass, two elements that turn up frequently in Americana. The album's opening blast, "Honey," is a perfect example of what Berlin-Nashville Express has to offer.

Savage appears to be a fiercely independent woman and this is where comparisons to Lynn could arise, especially on songs like the angry "I Can't Count On My Man."

Savage says that "I still have a strong affection for alt-rock, but Berlin-Nashville Express is generally more upbeat and sassy," she claims. "I have a lot of various musical influences that seem to lead me to write in varied styles, so for better or worse, no two records are likely to be all that similar. This album is an homage to original country and to all the fans of original country — especially to the many people who played a part in turning me on to it!"

This is a fine, fine country album. It's so good that we should all hope Savage's future work is just as inspired.