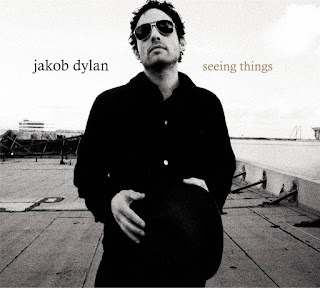 The children of music's biggest legends who pursue their own careers often experience mixed blessings. On the positive side it is a lot easier for them to get their music heard and recorded due to their connections while other artists who are just as talented often struggle to earn even a small amount of attention. On the down side they're almost always compared negatively to their far more famous and accomplished parents instead of only on their own worthiness.

Jakob Dylan is one of those offspring. It's not right, but The Curse Of The Famous Parent is going to hang over him forever. So, because The Wallflowers' leader deserves the attention he has earned on his own without being burdened by unobtainable expectations other people have assigned to him this review of Seeing Things (2008) will not be compared to Bob Dylan's work in any way. It will be discussed only on its own merits.

Dylan has recorded two solo albums apart from his band. Seeing Things is the first one and it's a satisfying, folk-oriented, singer-songwriter outing featuring the star on acoustic guitar and vocals.

The album's sparsely arranged tracks are courtesy of Rick Rubin who has run sessions for The Avett Brothers, Johnny Cash, and Neil Diamond. Rubin always brings out the best of an artist's acoustic side and Dylan's album is no exception.

Dylan does not have a strong voice but it's a pleasant one that make these melodic songs easy to listen to. His vocals are brighter and more up front than on any of The Wallflowers' albums and if that ends up being Rubin's chief contribution it's a very welcome one indeed.

I have to admit that I've never paid much attention to the Wallflowers' lyrics. However, Rubin's work makes Dylan's vocals and songs the centerpiece of the album so you find yourself listening intently.

Dylan has a lot on his mind. He is concerned about the state of the world and about the wars that were being waged in the early part of the 21st century. A prime example turns up on the very first track, "Evil Is Alive And Well."

"It doesn't always have a shape
Almost never does it have a name
It maybe has a pitchfork maybe has a tail
But evil is alive and well
It might walk upright from out of the inferno
May be coming horseback through deep snow
It's ragged fat and fat, it's hungry as hell."

As we look at America today the singer-songwriter's words still ring true because even if we are not at war with a common, foreign enemy we are certainly at war with ourselves.

Not every track is that serious but there are no lightweight songs and many are loaded with lyrical obscurities. I guess you can say that makes them deep.

There are only three other musicians listed on the liner notes and they add only light touches of bass, keyboards and harmonies which could be why we are only given their names but not what their individual contributions are.

The artistic success of Seeing Things made me wonder if Dylan should give up his band and concentrate on a solo career because with this album the whole is not greater than the sum of its parts.