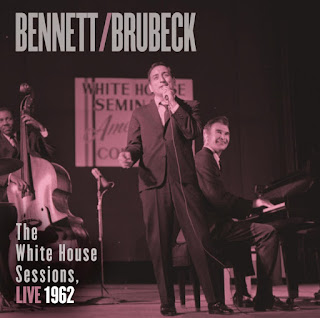 Shortly after Dave Brubeck died in 2012 a tape of an impromptu concert he gave with Tony Bennett in 1962 for the Kennedy administration was discovered in the vaults at Sony. "That Old Black Magic" was the only song from the sessions that had been previously released but the whole concert became available the following year. Whoever found the mislabeled show should be given a medal.

Bennett and Brubeck were asked to perform at the "White House Seminar American Jazz Concert" for college students who'd been serving as interns in Washington. The concert was held on August 28, 1962 and was scheduled for the Rose Garden but later moved to a theater near the Washington Monument because the large crowd could not be accommodated on the grounds of the President's residence.

Both men were at the height of their popularity. Brubeck's fame was mostly due to Paul Desmond's "Take Five," a smash hit for the band several years earlier, and Bennett's decade long career had recently soared because "I Left My Heart In San Francisco" had been released just a few weeks earlier.

Brubeck and his iconic quartet, Desmond on alto sax, Eugene Wright on bass, and drummer Joe Morello, opened the set with four perfectly played jazz pieces including a sped up version of Desmond's tune that challenged the original hit with its electricity. Morello is simply outstanding on this take.

Bennett's trio backs him on six songs before Brubeck comes back without his saxman to accompany the singer on four more. In addition to "San Francisco" and "Black Magic" the setlist included "Chicago (That Toddlin' Town)," "Just In Time," "Make Someone Happy," and a too-fast "One For My Baby (And One More For The Road)." The last one is nicely done but it's better served by Frank Sinatra's saloon version of the song. Bennett's is just a bit too happy.

This nearly flawless concert album was superbly recorded and should be in the collection of all fans of piano jazz and the Great American Songbook.

Here are the four tunes the two musical giants did together along with the updated "Take Five." Brubeck's solos are particularly enjoyable on the Bennett tracks.

The album is available at Amazon and on iTunes.