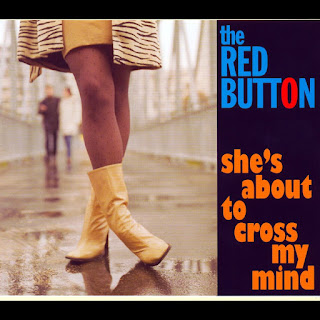 Despite their obscurity Seth Swirsky and Mike Ruekberg have a good reputation within the music industry. Swirsky has written songs for Rufus Wainwright, Al Green, Tina Turner, and Taylor Dayne. Ruekberg composed the soundtrack for the independent film Dummy and in 2007 they released their first of three albums together as The Red Button.

The Red Button blend all of the major components that the best power pop has to offer: melody, harmony and hooks. It's the British Invasion sound for the new millennium. She's About To Cross My Mind is for music fans who cherish the sound of the early Beatles, The Raspberries and the more innocent groups that came over from the big pond during the swinging 60s.

The album's first single and lead track, "Cruel Girl," is something the mean side of John Lennon could have written in 1963. "Floating By" is a dead ringer for a post-touring years Paul McCartney track. "She's Going Down" features some nice slide guitar and "Ooh Girl" opens with an "Eleanor Rigby" style string section. "Free" sounds like a cross between "Rain" and The Byrds' "Feel A Whole Lot Better When You're Gone" with it's great jangle pop arrangement spiced with a touch of psychedelia.

If you're tired of listening to the same 60s oldies and crave something more recent from this always very popular rock sub-genre then you may find a lot to like by letting your ears tune into She's About To Cross My Mind.