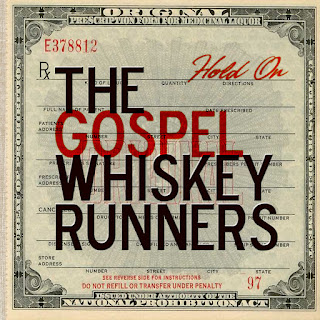 The quintet has been compared to Ryan Adams but to these ears a more valid comparison would be The Lumineers. The Runners' Jerrod Turner is a better lead singer than The Lumineers' Wesley Schulz and while they have not released anything as catchy as "Ho Hey" or "Ophelia" that is not a reason to ignore them. TGWR also have a fine female vocalist, just like Schulz's group, in Colette Boley who enhances their sound and is another reason for comparisons between the two bands.

Please don't believe that TGWR are merely mimicking The Lumineers and that is because their nine song, debut album, Hold On, hit the streets in 2011, ahead of the better known group's debut. The latter may have had more commercial success but that does not make them a better outfit.

The Gospel Whiskey Runners act is mostly acoustic but Ryan Stillwater is a loud, rock drummer who provides an edge that kick starts many of their folk sounding songs.

They chose their name because Turner's family bootlegged moonshine back in Kentucky.

The band's music has appeared on several popular television programs: American Idol, Criminal Minds, and Homefront and they have been played over eleven million times on Pandora.

You can listen to Hold On in it's entirety here as well as all of their follow up record Know Your Enemy.

Be sure to check out The Gospel Whiskey Runners website.
Folk Rock 'n Roll