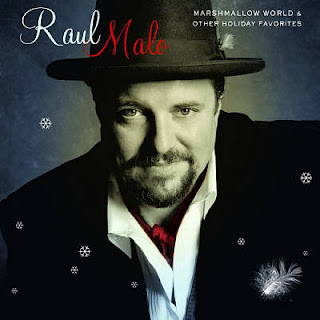 In an almost two hour show at New Hope Winery Raul Malo proved he is a superb singer and that statement should not come as a surprise. As always, The Mavericks' leader and frontman sounded like a graduate of the Roy Orbison school of vocals and all he needed as accompaniment was the solo acoustic guitar he played quite well all evening long.

Malo showed off his stuff with a nice mix of his band's songs and well known cover versions.

Malo played four songs from his band's most recent album, Mono, including its dynamite opener, "All Night Long." In this setting the song is not the barn burner it is on the Mav's album because there is only so much you can do with one acoustic guitar. The same can be said of "Summertime (When I'm With You)" another upbeat tune with a ska arrangement that is superior when played by the full band on the original album.

Non-originals included a salute to a man Malo was born to cover, Frank Sinatra. He sang a really nice rendition of "Strangers In The Night" that proved he could have been a superb interpreter of the Great American Songbook if he had chosen to go in that direction.

Other highlights included two songs from the star's solo Christmas album, "It's a Marshmallow World" and "Feliz Navidad."

Malo is also a good storyteller who relates to the audience very well. He told us about the time Willie Nelson, who was the evening's honoree at the annual Gershwin Award ceremonies held at The Library of Congress, offered him a joint. Malo said, "When Willie Nelson offers you a joint, you smoke it" despite the fact the library was crawling with people who walked the halls of our nation's Capitol everyday.

Overall, a Mavericks concert would have been a more pleasurable experience. However, Malo is always a joy to hear and his voice couldn't have found a better showcase. The absence of a band meant his singing was the focal point of the concert so his full-bodied, multi-octave range is even more apparent than it is on The Mavericks' busy records. If you had any doubts about the power of his vocals this concert should have erased them immediately.
Concerts Country Mavericks Raul Malo