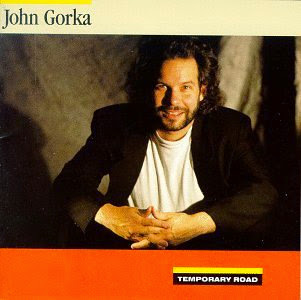 The prolific John Gorka has released fifteen albums beginning in 1987 but like many highly regarded singer-songwriters he's barely known outside the realm of folk music.

I've written before that I'm not a big fan of solo acoustic guitars accompanied only by a voice (I mostly find the format boring) but Gorka is one of the rare exceptions. He's so good that it is arguably the best way to listen to him because you don't want or need a band to divert your attention away from the stories he has to tell.

The singer-songwriter's golden baritone is a perfect framework for his songs and, it doesn't matter if he's singing a ballad or an uptempo tune, his vocal chords never have to struggle to reach for the correct notes.

The folkie's shows are also enhanced by his easy rapport with the audience, a necessary performance element for someone not prone to onstage theatrics.

Gorka is from New Jersey (a subject he discussed in one of his more famous and humorous pieces) but he gained and cemented his reputation playing clubs and coffee houses in and around Bethlehem, PA in the '80s where he attended school as a philosophy and history major at Moravian College. Since then he has also appeared on CNN, Austin City Limits, and Mountain Stage.

The easygoing and introspective troubadour can write seriously or with an excellent, self-deprecating sense of humor.  Either way, his clever wordplay is always apparent.

On "Grand Larceny," from Temporary Road (1992), he wrote about feeling sorry for himself when his car was broken into in Pittsburgh. He sang: "Pittsburgh has the Steelers and the Pirates and the thieves."

Another example shows his serious side. On "When I Lost My Faith," from 2001's The Company You Keep, Gorka says, "When I lost my faith in people, I put my trust in things to avoid the disappointment trusting people brings."

The folk veteran seldom strays from the sparse, mostly acoustic arrangements he's played and recorded for years but within that framework he always manages to be eclectic, smart, and possess an instinctive sense of what makes a song listenable.

If you're interested in attending one of Gorka's many concerts he's easy to catch, especially in Summer when he plays a lot of outdoor music festivals. Often you can see him for free or at very reasonable prices.  As a result I've probably seen him in concert more than any other musical act. You can find his upcoming performance schedule at his website.

We'll close with a sample of Gorka's humorous side.  On "I'm from New Jersey," from Jack's Crows (1991), possibly his best known album, he captures what it's like to be from that much maligned state as well as Bruce Springsteen always has without taking himself as seriously.