August 23, 2021
The article below was originally written after the passing of Phil Everly in 2014. It has been updated slightly as a tribute to his older brother, Don, whose death was announced yesterday. 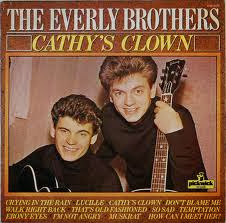 With the death of Don Everly much has been written about The Everly Brothers over the last couple of days. Another generic tribute seems unnecessary so it's time to approach his recent passing from a different direction.

Everly's death brings to mind what a lost art form pop-rock singing has become. There are plenty of stars today with a lot of talent but they don't often get a chance to show off their stuff. Digital processing of the human voice has removed the need for many singers to possess a great set of pipes and if the vocals you're currently listening to on the radio sound a lot like a computer you understand what I mean.

The Everly Brothers were from a time when rock 'n roll was in its infancy and still developing. Even though rock was looked upon as music for teenagers great vocal harmonies were in abundance. Included were everything from rough-edged, street corner, doo-wop groups to the lily-white, college boy sounds of the Four Freshman who were idolized by another producer of great harmonies - Brian Wilson. The three part harmonies of The Beatles - and mixed gender groups like Peter, Paul, and Mary and The Mamas and the Papas - exhibited vocal skills not often heard today. Later, Crosby, Stills, and Nash harmonized their way to the top of the charts.

This diatribe isn't meant as a knock on all of today's music because, thankfully, song composition has clearly matured from the days of "Bobby's Girl," "My Boyfriend's Back," "The Leader of the Pack," "Tutti Frutti," and "Whole Lotta Shakin' Goin' On." It was the lyrics that made much of the early rock seem so insipid and juvenile to adult audiences and I can't say that I always disagreed with them. However, today's producers can learn a few things from the rock pioneers on how to properly showcase a singer.

Auto-Tune did not exist in the 1950s. Do you think today's knob turners would have allowed the Everlys to use their voices to the best of their abilities? Even top notch singers such as this famous duo would likely have had their vocals processed into overly sweet diet cola instead of "the real thing."

Singing is probably the most important component in the making of records and the loss of much of its natural beauty has hurt the pop world immeasurably. Do today's producers really believe that listeners can't handle a naked human voice? If they do, I'll bet you my house they are wrong.
Everly Brothers In Memoriam Pop Vocals Rock 'n Roll