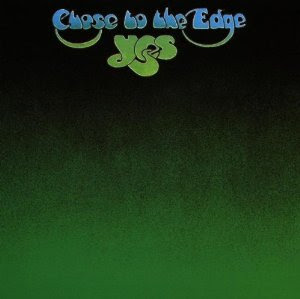 Jon Anderson's mystical lyrics aside, Close to the Edge (#4 UK and #3 in the USA) ranks with The Yes Album as one of the enduring prog-rock quintet's two very best works. It's a masterpiece from start to finish.

Everyone in the band was in top form on the more than eighteen minute long title track. Anderson's tenor vocals were brilliant even if the meaning of his lyrics remained indecipherable. The songwriter's voice never quite reached those soaring, spectacular heights again. The interplay between Chris Squire's bass, which is front and center, Bill Bruford's drums, and Steve Howe's guitar is astounding, but the star of the show was the phenomenal keyboard genius, Rick Wakeman. His perfect, hard rocking solo three quarters of the way through the track is clean, unpretentious, and menacing all at the same time and it came not long after the virtuoso gave us some majestic church organ sounds that grew out of the quiet mid-section of the piece.

Side two began with "And You and I." The duet between Howe's airy (for a Yes song anyway) acoustic, 12-string guitar featuring Wakeman playing some very melodic Moog over top of it during the song's first minute and a half (before Anderson's vocals begin) help to make it possibly the most gorgeous Yes song ever. The work here from the band's two newest members is one of their outstanding instrumental moments.

The song's mid-section, "Eclipse," was released as a single in America and only went to #42 on the Billboard Hot 100. Perhaps that's because Yes never learned that 45 RPM versions of their seemingly never ending, sidelong epics were always lacking emotion when truncated for top 40 radio. They always sounded edited.

At 8:55, "Siberian Khatru" is the shortest of the three tracks on the LP and is the weak sister of the set despite it being the most straightforward song. If the album's closing epic was showcased on another album it would be one of the better songs on it. However, since it had the bad luck of landing here it often gets short shrift. Howe is the obvious star. He played some of the most inventive, original stuff ever to grace a prog-rock song.

Close to the Edge is indeed overblown and despite its intricacies and artiness it's a loud, rocking disc. It's not only one of the greatest albums of the 70s it's one of the best rock LPs of all time. If you're a prog lover Close to the Edge offers everything that endears you to the sub-genre. Unfortunately, if you're not a fan you can also use this record as proof of rock's early 70s excesses.

Bruford left after the album was completed and was replaced by Alan White on the accompanying tour. Wakeman followed suit after the subsequent release, Tales of Topographic Oceans. The band's constant revolving door of personnel and changing public tastes would take its toll, and while Yes still had some great moments after Edge, they were never as consistent again.