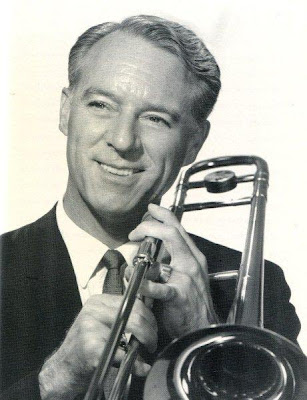 Until Paul Tanner (1917 – 2013) passed into the great recording studio in the sky earlier this month most people, including me, had never heard of him. Yet he's quite an interesting fellow who played on some of pop music's greatest recordings as part of a long and diverse career in the business.

It's hard to believe that there was still someone alive who played in the Glenn Miller Orchestra. The trombonist was the last surviving member of Miller's famous big band. He played with them from 1938 until 1942 on almost all of the bandleader's hits including "In the Mood," "A String of Pearls," "Chattanooga Choo Choo," and "Pennsylvania 6-5000."

What makes Tanner fascinating is the fact he was also the man who played on one of rock's most famous songs in 1966. He was responsible for the electro-theremin on The Beach Boys' "Good Vibrations."

After Tanner left the Army Air Force at the conclusion of World War Two he landed in California to work for ABC-TV, playing live for many of the shows on the new television network. Since the job occasionally required him to play some novelty instruments he became familiar with the theremin, a weird instrument invented by Russian Leon Theremin in 1920 that was often used to create sound effects.

According to The New York Times the theremin consisted "of two audio oscillators and an amplifier inside a wooden or metal housing, was played by waving one's hands in proximity to – but not touching – two antennas, one controlling volume and the other controlling pitch."

One day in the studio Tanner witnessed a musician struggling to master the theremin and this gave him an idea. He contacted a friend with electronics experience and together they invented the electro-theremin. This new, modern version of the device used controls that the musician would actually touch to produce the same sounds as Theremin's original invention.

Eventually Brian Wilson, who was always looking for weird percussion and unusual sounds for his records, got in touch with Tanner and the rest is history. The coda and fade Tanner contributed to "Good Vibrations" became one of the most instantly recognizable passages in popular music. The former swing musician also played the instrument on The Beach Boys' "I Just Wasn't Made For These Times" from Pet Sounds and on the single and title track to their Wild Honey LP.

Tanner earned three degrees from UCLA, including a doctorate, where he also taught music for twenty-three years.

Once, during an interview, Tanner told this funny anecdote about his time teaching at the university. Again from The Times: "The question I remember best was asked in class one day. One kid said, 'Professor Tanner, did they have groupies in the swing era?' I said, 'Yes, your Mama.'"

Tanner also wrote several books about jazz including a text book and he also composed several works for the trombone.