Jimmy Lafave - Depending On The Distance (2012) 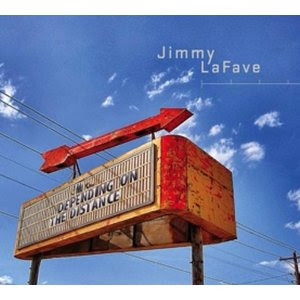 Jimmy Lafave is constantly referred to as one of the very best unknown singer-songwriters in the music business. With a stellar twenty year career based out of Austin, TX you would think that an artist with his talent would be more well known. Sadly, he still languishes in near obscurity outside of Texas and his native state of Oklahoma.

It took Lafave five years to follow up his 2007 CD, Cimarron Manifesto, an outstanding set of thoughtful songs that prove his reputation is well deserved. It's an album with all killer and no filler so you need to own the entire album, not just individual tracks. In one of the more lengthy articles in the All Music Guide you'll find some of the most glowing praise I've ever read in a music review.

The trouble with making an album as outstanding as Cimarron is that it's almost impossible to follow it up and such is the case with Lafave's tenth album, Depending on the Distance.

Lafave's ego is not so large that he fills his albums with only his compositions. That's good because he's always had impeccable taste in cover versions and reinterpreting other people's songs. This time around five of the thirteen entries come from the hearts and minds of others. He turns John Waite's pop hit, "Missing You," inside out. He still gives it an uptempo treatment but without all of the melodrama of the original.

Then, there is a remake of Bruce Springsteen's more recent "Land of Hope and Dreams." While not quite as effective as The Boss's version Lafave proves that he and New Jersey's most famous son are kindred spirits. While one is a folky and the other a rocker they come from the same place emotionally and intellectually. Both have done tributes to famous folk musicians: Springsteen a CD full of Pete Seeger songs and Lafave a national tour dedicated to Woody Guthrie.

Lafave is known as a master interpreter of Bob Dylan and here he devotes three tracks to his idol: "Red River Shore," "I'll Remember You," and "Tomorrow is a Long Time." The first two are so good they actually make you forget the bard's originals. Lafave's less than overpowering voice is always pleasant and his gravelly, emotional delivery is actually more appropriate for this material than Dylan's is. The Texan winds up owning both of these songs.

Lafave's originals are always good too but if there is a complaint this time around it's that the album is too top-heavy with ballads. He could have easily turned on the afterburners just a bit more without alienating his loyal following. He's done that effectively in the past. The disc could definitely use a couple more boogie numbers such as "Red Dirt Night." "Talk to Me" and the gospel tinged "Bring Back the Trains" also have an uptempo sound but these soft rockers are not quite enough to get a groove flowing.

If you're a Lafave fan this CD should still be added to your collection. However, this time the covers are better than his own songs.