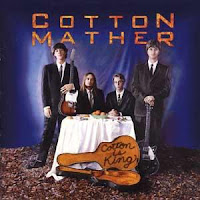 Noel Gallagher heard Kontiki and he was impressed enough to ask Cotton Mather to tour with Oasis. The exposure helped the Texans' single, "My Before and After," to become a hit. Alternative and indie radio loved the song and the critics raved about the entire album. Great things were expected from the band in the future. However, after a couple of minor EP releases and one more full length CD, The Big Picture, in 2001 Harrison dissolved the group without any further success.

Before Kontiki was released I discovered the band's debut CD, Cotton is King, in a $1.00 cut out bin and was intrigued enough by the cover, liner notes, and lyric sheet to take a chance on it. I wasn't disappointed with my bargain basement purchase and despite the almost unanimous, positive reaction to Kontiki my ears prefer the former album.

On Cotton is King guitarist Harrison's voice may easily remind you of either John Lennon or Glenn Tilbrook, or both. Harrison combined intelligent lyrics to melodic songs with crashing guitars that frequently sound like the rock 'n roll side of Revolver.

The band doesn't fool around, they don't jam, and they never waste a note, but its clear that Whit Williams on guitar, Matt Hovis on bass, and drummer Greg Thibeaux are primarily on board to service Harrison's songs. That could be the reason why there was a constant flow of personnel running through Cotton Mather's revolving door. By the time Kontiki was released only Williams and Harrison remained.

Harrison wrote all twelve songs on Cotton is King and its sometimes humorous, cutting edge lyrics revealed a composer with true talent. "Lost My Motto," "Cross the Rubicon," and "Ivanhoe" are very literate songs. One of the more interesting tunes, "The Words of Shaman Roger," skewers religious cult figures.

Power pop fans who continue to lament the lack of success of the late Alex Chilton's early 70s band, Big Star, should also mourn the loss of Harrison's forgotten quartet too. They are just as worthy.

Listen to "Lost My Motto."