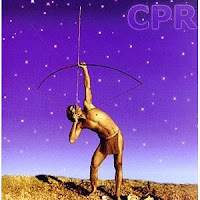 CPR was a band that included David Crosby, his guitarist Jeff Pevar, and keyboard player James Raymond. I'm sure the trio's name was inspired by the acronym used for the Hall of Famer's legendary outfit, CSN&Y.

CPR has an interesting back story. Crosby is Raymond's natural father. He gave the child up for adoption in the early 60s and for decades Raymond didn't know anything about Crosby (except possibly that he was a famous musician). After the younger man discovered his roots in 1992 the father and son talked on the phone, hit it off quite well, and met two years later. Ironically, Raymond was also a musician who majored in music at Cal State – San Bernardino so Crosby asked him to join a new band he was organizing. They began writing songs together and this led to CPR's eponymous debut CD.

Too appreciate this disc at all you have to be a fan of Crosby's work. He always wrote the least accessible music for CSN (that does not mean bad) and this album follows that path. His lyrics are never lightweight, and his melodies are not always readily apparent, but the group's vocals are impeccable. Of the eleven tracks Raymond sings lead on three, Crosby the other eight, and Pevar adds to the excellent group harmonies that often remind the listener of CSN. The leader wrote or co-wrote all but one of the songs on the album with assistance from his bandmates. The other track, "One for Every Moment," was written by Raymond alone.

The CD's best song is the opener, a Crosby-Raymond composition titled "Morrison," about the lead singer of The Doors. It's Crosby's impression of The Lizard King and his comments on how the world views the late frontman. It's a bit preachy but still a fine piece of work. On the chorus he sings, "I have seen the movie and it wasn't like that."

CPR is the first of two albums the group recorded. They also released a live double set in between the studio efforts. Although the group officially disbanded Raymond still performs with Crosby to this day as part of the CSN&Y road band. Pevar continues to work with many well known rockers, especially the recent versions of Jefferson Starship.