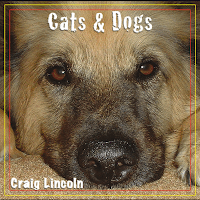 Singing, acoustic guitar soloists normally aren't my thing. I'm more of a rocker at heart. I like the sound of a full band and it takes a lot for a singer with nothing more than his unamplified ax to grab my attention. Fortunately for Craig Lincoln, Cats & Dogs, his brand new CD, is one that stands out among the coffee house crowd.

First, a little biography. Lincoln began playing guitar at age thirteen and, as this disc shows, he became quite a master at it. He recently teamed up with another singer-songwriter, Sabrina Schneppat, and they just released their debut CD together as a duo. Long ago, Lincoln became one of the first multi-taskers. While studying his instrument he also worked hard enough to win an Olympic bronze medal in men's springboard diving for the United States at the Munich Summer games in 1972. He's quite a talented guy.

There are several reasons Cats & Dogs should interest you. Lincoln's musicianship shines through on every song but it does not overwhelm his smooth, melodic vocals.  Of course, as is always the case with folk music, none of that would matter without a batch of songs that mean something and Lincoln's most certainly do. The title track uses our beloved pets as a metaphor for human relationships. "Religious Experience," the only live track, is about making love so fine it actually becomes the name of the song. It's a hoot without being totally sacrilegious. "My Father's Son" could be a welcome replacement for Dan Fogelberg's overused and abused "Leader Of The Band."

The best songs are the two acoustic blues numbers, "Just Like Stevie Ray" and "Little White Lies." The latter may be the only song to fit the word "verisimilitude" into its lyrics. Lincoln adds a little blues harmonica to both tunes for some added color. He hints that a whole album of earthier, blues oriented material would be welcome and that maybe, just maybe, he'd like to pickup a Stratocaster, form a power trio, and do some shredding.

This is a nice debut from an already fully developed talent.

You can find out more at Sabrina and Craig's website.
Folk Singer-Songwriters