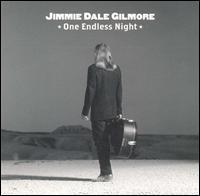 Let's start out by saying that alternative country music artist Jimmie Dale Gilmore is an acquired taste. To put it mildly, he has an odd voice, which can be off-putting to a lot of people. But he always sings in tune which is more than can be said about many of his contemporaries. One critic wrote that Gilmore's voice is not appealing enough to listen to him do an album of covers. I disagree. (He wrote only two of the thirteen songs on this disc.)

Gilmore, who is devoted to his beloved Texas, performs these songs by well known rock and country composers in a style that compensates for his voice. He performs with a full electric band, playing light rock or country arrangements and brings an appealing originality to the songs. If Gilmore ever wanted to be a rock' n roller rather than a country singer he would have done it well.

Gilmore covers songs by singer-songwriters such as Jesse Winchester, John Hiatt and Walter Hyatt. There is a cover of Jerry Garcia's Grateful Dead tune "Ripple" that for my money outshines the original. Perhaps the weirdest track is a cover of "Mack The Knife" with a sparse arrangement slowed down to the point where it becomes a totally different song from the Bobby Darin hit version of 1959.

Further elaboration will not make you fully appreciate this album or Gilmore's singing. Everyone should listen to this disc at least once. I think it is a great piece of work but I fully understand if his voice will make you want to take a pass on a second listen.
Country Singer-Songwriters