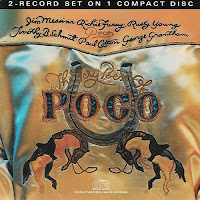 Every Sunday evening during Summer the Philadelphia suburb of Upper Merion Township hosts an outdoor concert series they call Concerts Under the Stars. The promoter brings folkies and many singer-songwriters such as John Gorka, Karla Bonoff, and Michelle Shocked to its stage. Occasionally they slip in somebody more famous such as Roger McQuinn who wowed the crowd a few years ago with a solo, electric, 12-string performance. This year the series opened with a bang. One of my all-time favorite bands, Poco, took the stage as a trio Sunday night for what was billed as an all acoustic show.

Poco's only remaining founding member, Rusty Young, is still in the lineup. So is Paul Cotton, who replaced original member Jim Messina very early in their career after leaving the little known Illinois Speed Press. The band's two veterans were joined by bassist Jack Sundrud who has previously worked with Vince Gill and Dickie Betts.

Young is an amazing musician who jumps from one stringed instrument to another with the ease and dexterity of some of the great session players of the genre such as David Lindley and Greg Leisz. It is obvious that the only band member to appear on every single Poco album and CD is the glue that held the whole thing together amid decades of personnel changes. The band originally established by Richie Furay and Messina way back in 1968, after the demise of Buffalo Springfield, truly has become his domain.

They opened the concert with Young's "Call It Love" and continued with my all time favorite Poco song, the wonderful "Rose of Cimarron." "Pickin' Up The Pieces," "Grand Junction," "Bad Weather," "Indian Summer," "Kind Woman," "A Child's Claim to Fame," "Crazy Love," "In the Heart Of the Night," and "Barbados" were among the many songs the trio performed as the evening progressed. Sundrud was featured on two of his own songs, one which appeared on a recent Poco CD.

Young is the spokesman onstage and he has an appealing, self-assured, sense of humor that puts the crowd at ease. He told a story about a recent Poco reunion in California featuring all of the band's most prominent former members, including Furay, Messina, original drummer George Grantham, and Timothy B. Schmidt. Without telling anyone who his new band was, when mentioning Schmidt's departure from Poco, Young said that he left "to take a better paying job."

Poco is not an unknown band who never had a hit, but they never received the money and fame their talents should have bestowed upon them. They have always been one of America's truly great musical institutions.

Poco will continue touring this summer and will be joined by Furay in upstate New York while opening for Loggins and Messina.

Finally, I don't know the date of this performance, although by the lack of wrinkles and age spots, and the fact that Schmidt is present, it must be from the 70s. Anyway, here is a video featuring a partial performance of "Rose Of Cimarron" with Cotton and Schmidt on lead vocals. Enjoy!