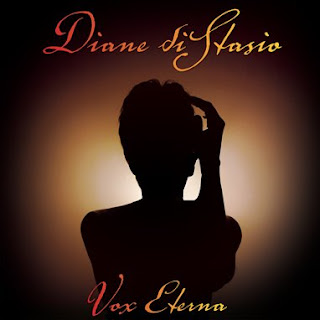 I'm not a fan of opera and I know in some quarters that makes me a Philistine of the highest order. However, I do enjoy some classical singers when they embrace the world of pop, especially when the results are as outstanding as the present we just received from Diane di Stasio in the form of her debut CD, Vox Eterna.

Vox Eterna, will be released through itunes on April 28, 2009 and on CD a few weeks later by Shadowland Music. These ten tracks are truly pop songs, not opera, but di Stasio's gorgeous soprano elevates them into a realm of their own. Whether her arrangements call for a bank of strings or synthesizers her vocals clearly make the results a thrilling musical experience. She is rightfully the star of her own CD.

The single and the opening track, a cover of The Moody Blues' "Nights In White Satin," lacks the pretentiousness of the original and the long, sustained high note di Stasio delivers near the end of the song is absolutely stunning.

Immediately following is the album's standout track, "Shadows." It starts out with di Stasio cooing softly over a solo piano. The song gradually builds in both intensity and volume, adding strings and electric rhythm guitars along the way, until guitarist Brennan Smiley takes it home with a rock 'n roll solo during the finale that is again highlighted by the soprano's voice soaring over the massive wall of sound the song has become.

For people who prefer Top 40 there are tracks such as "Find A Place To Breathe" and "Take Me There." Both are dominated by machines masquerading as musical instruments but, unless you are listening below the surface, you won't notice the technology because the most important and beautiful instrument on the disc, di Stasio's voice, is so melodic and graceful that the musicality of the songs shine through in spite of all the programming.

Interesting musical arrangements often back up di Stasio's vocals. "Dreams" has a string laden instrumental break reminiscent of any of the Indian and psychedelic sounds that appeared on 1967 era Beatles records. Later, I realized that it's probably not a coincidence because the credits for this song included a sitar and Abbey Road Studio's celesta and bells.

There is also a moving cover of Sting's "Fields of Gold" that rivals the original.

The sessions were produced by Grammy nominated artist and producer, Billy Smiley and di Stasio had a hand in the arrangements.

The talented singer has performed on stages all over America and Europe. She sings in eight languages including French, Italian, and Japanese.

Diane di Stasio is mostly for fans of Loreena McKennitt, Annie Haslam, and Enya with a dash of Sarah Brightman tossed in for seasoning. In their quest for airplay her record company is aiming at adult contemporary radio stations and classical crossover, non-commercial, radio stations. Let's hope that the disc receives airplay and America gets to hear this new release that will surely make my list of 2009's best CDs.

You can hear sample's of di Stasio's voice on her MySpace page.