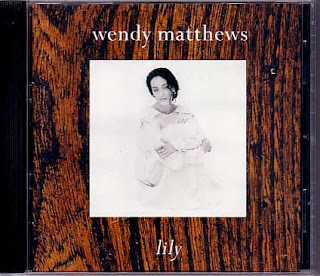 You know an artist is slated for the big time when T-Bone Burnett is the producer so it shocked me that I never heard of Australian Wendy Matthews when I first listened to her second CD, Lily, several years after its 1992 release.  I had no idea who she was and I wondered why Burnett, Booker T. Jones, and INXS members Jon Farriss and Garry Beers  were all playing in a band with a singer I knew nothing about.
Later, I was surprised to learn that Lily went double platinum and contained the big hit single, "The Day You Went Away." The song peaked at #2 on the Aussie singles chart and is Matthews highest charting record.

Matthews is a native of Montreal who left home at seventeen to busker her way to Los Angeles. She eventually ended up singing backup on countryman Glenn Shorrock's tour after he left Little River Band. When the tour was over she made the decision to stay in Australia and the singer quickly became a frequently sought after session vocalist for many of her adopted country's biggest rock stars. In late 1991 she toured with The Neville Brothers after recording her first of eleven albums. By then she was well on her way to stardom and a career that has made her one of the most beloved singers in the land down under. You can get the full story on her website.

Lily is excellent from beginning to end. I liked the CD when I first heard it long ago, and I like it even more today. It shows Matthews to be a superb interpreter of other people's songs. The album is full of light rock, light R&B, and acoustic folk-pop all blended into diverse yet cohesive pop performances. While the rock and soul may be on the soft side the songs and Matthews vocals are not. Highlights include "Quiet Art," "Homecoming Song By Suzannah Castaway," "Face Of Appalachia," the rocker "Walk Away," and a cover of the old Teddy Pendergrass hit "T.K.O." The album is rounded out by the superb band assembled by Burnett.

It's time America discovered Wendy Matthews. Australia and Europe already have a long time ago. I need to scold myself for not digging deeper into her work. I don't know why I haven't.
Australian Buried Treasure Pop Vocals Soft Rock