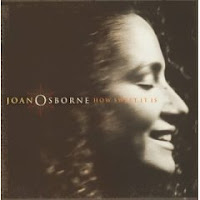 I'm a late comer to Joan Osborne. I liked the same songs from her 1995 debut album, Relish, that radio loved, "St. Theresa," "Spider Web," "Pensacola," and her huge hit "One Of Us," but not much else. It took listening to her fabulous cover version of "What Becomes Of The Broken Hearted" from the soundtrack of Standing In the Shadows of Motown for me to fully appreciate her vocal gifts.

How Sweet It Is is a very fine set of cover versions of classic R & B mixed in with some vintage rock songs. The CD opens with two great tracks, The Spinners' "I'll Get Around," and Aretha's "Think." A cover of Stevie Wonder's "Love's In Need Of Love Today" is especially nice and her version of "Smiling Faces Sometimes" with Isaac Hayes, is as good as the original. Dave Mason's "Only You Know And I Know" rocks and surprisingly she tackles Jimi Hendrix's "Axis: Bold As Love" and makes that work too. Her slowed down, more laid back arrangement of Edwin Starr's "War" makes it an entirely different song.

Osborne has one of those great female voices that are powerful without screaming. The very best women singers have always been the ones with full-bodied vocals who have the versatility to stretch their vocal chords around almost any song and this Brooklyn, NY native is one of them. She is neither a diva nor a blues belter. Instead Osborne is an R&B and rock stylist singing songs that are tailor made for her talents. She is a good songwriter but if she chooses to never compose another note a great career would still await her as one of the best blue-eyed soul interpreters in rock.
Joan Osborne Rock 'n Roll