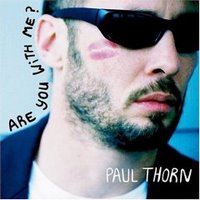 Paul Thorn’s music was so passionate. Hammer and Nail, his debut, and Mission Temple Fireworks Stand are terrific CDs that combine roots rock, blues, sad balladry, great hooks, and intelligent songwriting. Unfortunately, Thorn’s latest, Are You With Me, disappoints me because I wanted to love it so much.

Are You With Me doesn't live up to any of its predecessors because Thorn has gotten away from making the music he does best. While I love artists who break the mold in an attempt to stay fresh Thorn's latest falls flat because Are You With Me is more blue-eyed soul than blues and there is little or no rock 'n roll. Most of the disc's songs are about relationships, a typical R&B topic, in lieu of his usual philosophical, and sometimes humorous, subject matter he liberally spices with religious imagery.

It’s not that Are You With Me is a bad album, because it isn’t. It’s just not nearly as interesting or dynamic than all of Thorn’s previous CDs. Everything is well-produced, well played, and well sung, but if Thorn wants to do R&B in the future I suggest following the earthier sounds of the late Wilson Pickett in lieu of smoother sounding soul men such as Al Green and Sam Cooke. His voice has more in common with Pickett than either of the those soul crooners.