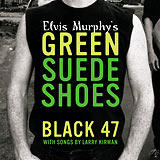 With Elvis Murphy's Green Suede Shoes Black 47 has flied out to the warning track. Their last two wonderful studio CDs, 2000's Trouble In The Land and last year's New York Town, were grand slam home runs so it is unfortunate that the band's latest falls short. Yet we shouldn't complain. Even Joe Dimaggios's hitting streak had to come to an end.

The problems are two-fold. Larry Kirwan's voice, which is often far from pleasant, was less troublesome on this disc's two predecessors because he compensated for it nicely. The second, and even bigger problem, is musically the band seems to have run out of ideas. While Kirwan is once again lyrically great, (The man can spin a yarn as well as Bob Dylan) the arrangements have become stale and repetitive. This CD's "Uncle Jim" is a dead ringer for their earlier "Czechoslovakia," and at certain points, "The Day They Set Jim Larkin Free" could be mistaken for their classic "James Connelly."

Another questionable Black 47 trait is the recycling of old songs on new releases. In the past the band re-recorded their old songs, updating the arrangements. This time out they didn't even bother to do that. Instead they lifted three songs wholesale off of Kirwan's solo CD Kilroy Was Here.

Not only is Black 47 retreading songs, the band is now retreading album titles. This CD's title, which is a companion to the memoir that Larry Kirwan wrote of the same name, is too close to their 1996 CD Green Suede Shoes.

I was hoping once again that Elvis Murphy's Green Suede Shoes would follow in the footsteps of their other recent releases and become my favorite CD of the year. Unfortunately, as one might say to a hitter chasing Dimaggio's record, "Wait until next year."