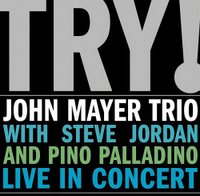 Neither his breakthrough CD, Room For Squares (2001), nor its followup, Heavier Things (2003), provided any indication that John Mayer was capable of playing top-notch, blues-rock guitar so, to fans of those pop-oriented, singer-songwriter releases, the discovery may have come across as quite of a shock. When Mayer appeared on albums alongside all stars such as Eric Clapton, B. B. King, John Scofield, Herbie Hancock, and Buddy Guy and announced that he wanted to change his musical direction many of us were stunned. Fortunately for us his roll of the dice proved to be a winner.

On Try! Mayer's band included studio stalwarts Steve Jordan on drums and Pino Palladino, who later replaced John Entwhistle in The Who, on bass.

The set includes reworkings of a couple of Mayer's earlier songs ("Daughters" and Something's Missing"), a hot version of the Ray Charles classic, "I Got A Woman," a Jimi Hendrix tune, "Wait Until Tomorrow," and a few new originals including the great title track that is credited to the entire trio.

As a guitarist Mayer is quite tasteful. He can jam with the best of them but he knows when to reign it in. His solos are never so long that you're looking at your watch wondering when the excess will come to an end.

Mayer's rough, gravely, voice was never fully suited to the kind of pop music he sang on his first two albums. It always seemed out of place, but here his vocals suit his songs very well.

Try! easily proves that Mayer is not just a pop artist recording lightweight fare that appeals mostly to women. I was never a true fan before but this transitional, live album is his Rubber Soul, a set of music that had early skeptics sitting up and paying attention.